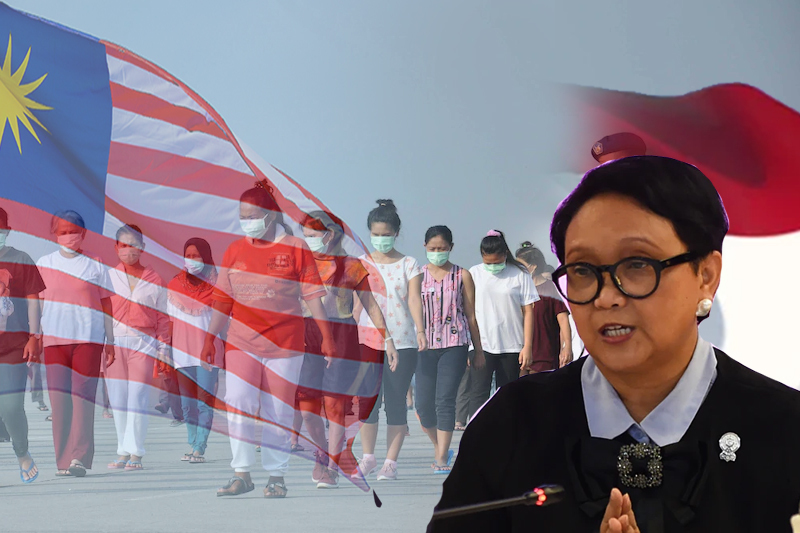 Indonesia – In response to a report by an advocacy organization that claimed the detainees were being held in “hellish” conditions, the Indonesian government has decided to hasten the repatriation of illegal migrant laborers imprisoned in Malaysian detention facilities.

Indonesia’s Foreign Ministry said in a statement on June 29 that it had been in touch with Malaysian officials and asked that the process of repatriation be started right away at the expense of the Indonesian government.

According to the statement, “it was also emphasized that the detention institutions’ conditions should be addressed in terms of access to health and sanitation services.”

The ministry announced that the Indonesian embassy in Sabah will step up its monitoring efforts and support for the repatriation process’ requirements for clothing, food, medication, medical equipment, and COVID-19 tests.

The Coalition of Sovereign Migrant Workers released a report detailing the plight of these detainees, who are thought to number close to 4,000. The report claimed that the deportees were being subjected to violence, including beatings, beatings, and kicks, and that their living conditions were filthy, crowded, and without sunlight.

Prisoners who were unwell were neglected, according to the report “As in Hell: Conditions of the Immigration Detention Center in Sabah, Malaysia,” which was published last week. It further claimed that detainees were only transferred to the hospital when their condition was extremely critical.

Additionally, it stated that 18 prisoners died at one of Sabah’s five detention facilities between 2020 and March of this year.

Suardi was one of the victims; according to eyewitnesses, he was assaulted by guards in front of other prisoners before being handcuffed and sent to solitary confinement. In January of last year, his death was reported.

The Malaysian embassy in Indonesia confirmed in a statement that seven more detainees have died this year after 18 died at one camp last year, but it did not provide further details about their causes of death.

According to Gabriel Goa Sola, director of the church-affiliated Advocacy Service for Justice and Peace in Indonesia, the issue of illegal migrant workers must be addressed by the government in addition to freeing the detainees.

The treatment of illegal migrant workers is still insufficient, he claimed.

Of the 9 million migrant workers in Indonesia, 5.3 million are undocumented, according to the Indonesian Migrant Workers Protection Agency.

East Nusa Tenggara, which has a large Christian population, is a key source of illegal migrant workers, most of who go to Malaysia to find employment.