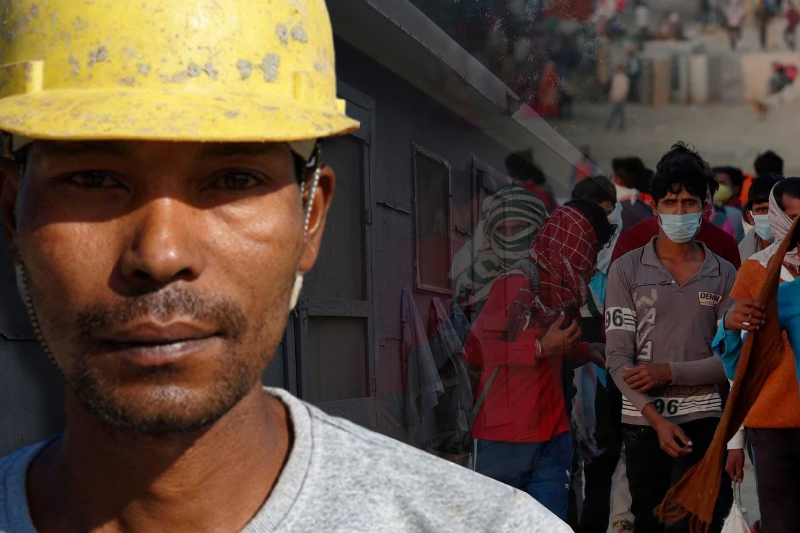 India – Shelter a basic human need for survival is what migrant workers in India are devoid of, leaving them living in rather precarious circumstances. While urbanization has led to increasing pressure on infrastructure and services such as housing, health and sanitation in up-swing in urban regions, rural areas in India have lacked the same enthusiasm. This is despite around 70 per cent of Indian population lives in rural areas, according to 2011 Census of India. Maharashtra and Uttar Pradesh experience most acute migrant housing crisis among Indian states.

Majority of migrant workers are employed in sectors such as hotels, small industries, construction, domestic work and other such informal activities. And those working in hotels, homes and smaller units often get accommodation at the workplace. These lodging facilities are usually unhygienic, poorly ventilated and don’t fit in norms of a decent housing facility. On the other hand, the casual workers can be seen sleeping under bridges, pavements, and in groups. During pandemic the housing of migrants has reached a crisis situation.

As pandemic outbreak hit the country and lockdown was imposed, due to poor communication and lack of assistance thousands of migrants were forced to rush back to their hometowns on foot. Loss of job and pay had left them no means to afford temporary and makeshift accommodation. Migrants who stayed back, found themselves in cramped up situation with no possibility to maintain social distancing. Though government had announced waiving two months’ rent, the pressure was too much as lockdown continued.

2020 ILO report on internal labour migrants shows that lack of dignified housing is further worsened by absence of adequate clean water, sanitation and hygiene (WASH) facilities. Despite installation of public toilets under Swachh Bharat Abhiyan, the availability is not adequate in migrant-dense clusters. Migrant workers often are able to find accommodation in slums, giving them access only to the meagre infrastructure and services.

The Rs 20 lakh crore worth of Atmanirbhar Bharat package that was announced by the government of India in May 2020 included the provision of affordable rental housing complexes (ARHC) for migrant workers as well as urban poor. The plan aimed at converting government-funded housing in the cities into ARHCs via PPPs, and provide incentives to stakeholders for developing ARHCs on their private land and also operate them.

The state must ensure that the social rental housing is located in an area with proper access to transport networks, healthcare and education. NITI Aayog’s working group has also recommended rental housing in public sector to be through dormitory accommodation expansion. This would also enable the public housing as affordable. Policies that are practical and action oriented are the only means to solve housing crisis of thousands of migrants in the country.