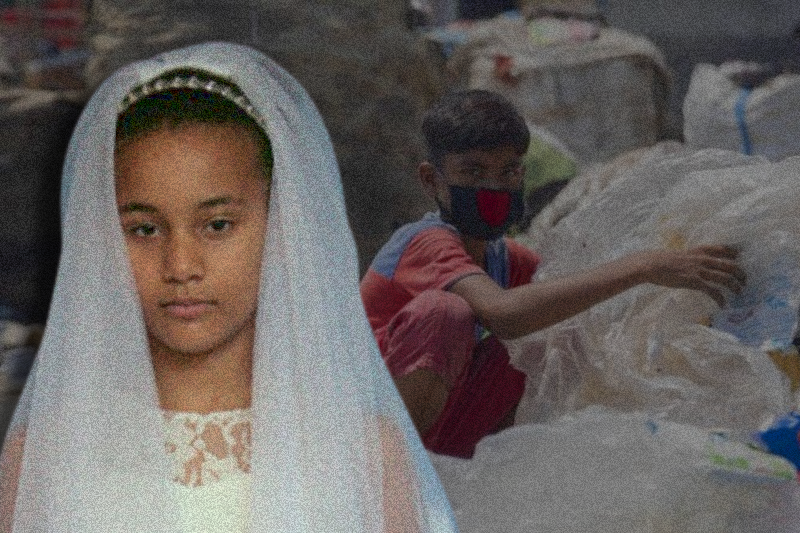 Bangladesh –Human rights organizations have been fighting hard to eradicate child labor and child marriage from Bangladesh. This arduous task has been pushed further away by the ongoing Covid-19 pandemic, found a recent study by Manusher Jonno Foundation (MJF). The organization works to improve lives of marginalized communities in the country.

MJF, a non – government and non – profit organization, found in a study that last year between April and October at least 13,886 girls were forced into child marriage. They were of age bracket 10 to 17 years. Furthermore, 8,140 children were compelled to work. “Child marriage and child labour have increased due to the pandemic — and poverty was the main reason,” said Shaheen Anam, executive director of MJF, while speaking at a webinar with subject of bringing children back to physical classrooms post-pandemic. The survey by MJF was conducted with support of UNFPA, UNICEF and Plan International in 21 districts.

The webinar shared story of a class 10 girl from Nilphamari who was forcibly married off during pandemic and a child from Kamrangirchar who was forced into child labour. “Maybe, the parents thought of marrying off their girl child and sending their boy child to work as a coping mechanism,” said Anam, who is also a core group member of Citizen’s Platform for SDGs, Bangladesh. The webinar was hosted jointly by MJF and Citizen’s Platform for SDGs, Bangladesh.

Another survey of MJF found that during pandemic 2,400 children were forced into dangerous labor with lower wages than before. Additionally, 2,500 children, who were earlier enrolled in primary schools with MJF partner support, engaged in work due to their financial crisis in their families. “Many children entered the workforce for the first time to help support their families. Those children had to work because their families did not have enough food and their parents lost jobs when businesses were shut down,” Anam said. Bhattacharya, a distinguished fellow of the Centre for Policy Dialogue (CPD) said that drop out rate from school was more among girls. “We are in the dark how the education losses incurred due to the pandemic closure will be recovered. Without a social movement it will be tough to overcome the issues like child marriage and child labour,” Bhattacharya said. During webinar, Bhattacharya proposed special incentives to bring back girls to schools and retain the others.

Mustafizur Rahman, distinguished fellow of CPD; Quazi Faruque Ahmed, founder and chairperson of Proshika; Mohammed Nannu Mollah, joint secretary at the labour and employment ministry; Nazma Sheikh, deputy secretary at the primary and mass education ministry; Belal Hossain, director at the Directorate of Secondary and Higher Education; and Mostafizur Rahman, joint inspector general at the Department of Inspection for Factories and Establishments, were other speakers at the webinar.