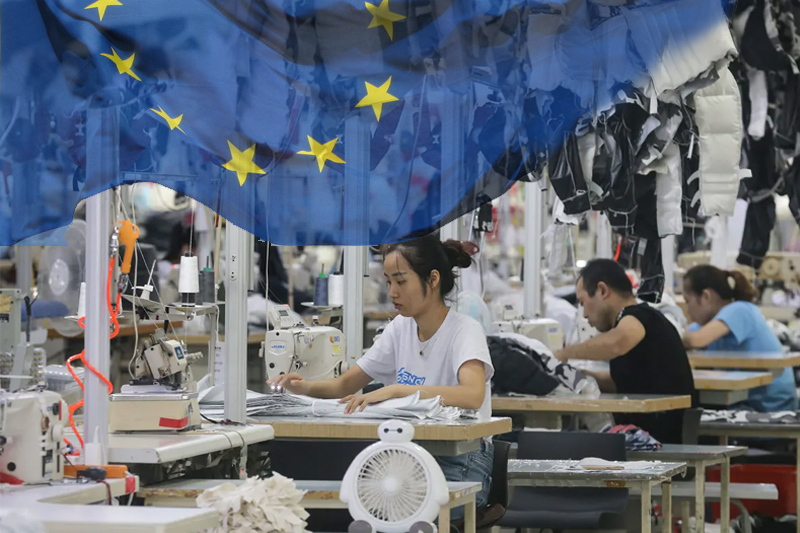 China – Chinese businesses are concerned about the impact of the EU’s corporate sustainability directive on their business operations, according to a survey commissioned by the Chinese Chamber of Commerce to the EU (CCCEU), and they have called for a revision of the proposed rules that are partially aimed at addressing human rights abuses in China.

According to the study, a rising percentage of Chinese enterprises operating in Europe are worried about the due diligence proposal being discussed at the EU level to hold companies liable for human rights abuses along their whole value chain.

In order to “avoid it from aggravating firms’ concerns about the requirements for value chain due diligence and increasing uncertainty,” the report proposes for a reform of the regulation.

The report states that the present due diligence regulations “may enhance compliance costs for Chinese textile and solar enterprises to access the EU market,” based on responses from 150 Chinese companies.

According to Liang Linlin, head of communication and research at CCCEU, the regulations would place a “quite significant burden on the enterprises to abide by the laws,” which would be “very daunting for the companies.”

A Commission representative noted that increased costs might be incurred by businesses as a result of due diligence procedures and expenditures made to mitigate negative effects.

The official added that businesses might save these expenses by working together, and sustainable business practises would probably draw in more customers and investors.

Chinese businesses are worried that the new regulations governing corporate accountability “may split the market,” the report claims.

The Commission contends that the absence of EU-wide regulations is what leads to market fragmentation. According to a representative, a European framework would give businesses legal stability and improve their financial performance.

Linlin advised the executive to “listen to the concerns and the voice of Chinese companies in the EU” when asked what the Commission should do to reassure Chinese companies while also making sure supply chains are free of human rights issues.

She added, “We would like to have a more transparent and equitable discourse,” and the CCCEU will present the survey results to the Commission.

The EU Commission has recommended a ban on items created using forced labour, which was brought up in the report on September 14 in an effort to prevent the import or export of commodities tainted by violations of human rights.

The Xinjiang-produced goods would also be subject to the ban. Numerous reports have revealed widespread surveillance, arrest, and persecution of the Muslim Uyghur minority by the Chinese government in this area of China.

The “arbitrary and discriminatory incarceration” of Uyghurs and other Muslims in the area by China, according to a recent UN assessment, may amount to crimes against humanity. Moreover, various human rights organisations have accused China of conducting forced labour in internment camps.

While the CCCEU analysis notes that the restriction may divide the market, much like due diligence regulations, it does not examine the precise grounds for concern for European Chinese enterprises with regard to the prohibition.

Regarding if Chinese businesses were concerned about potential restrictions on sourcing from Xinjiang owing to human rights breaches, Linlin did not respond to EURACTIV’s inquiry.