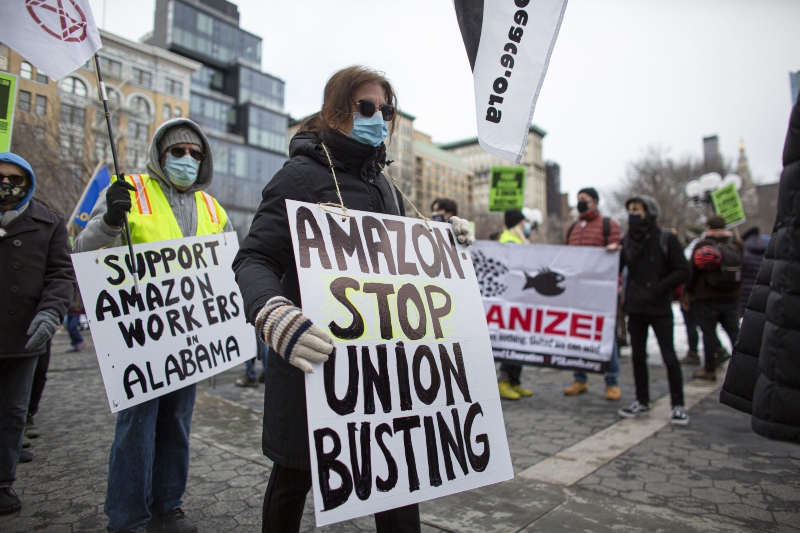 us workers are urging unions to become more popular

United States – Workers in the United States are more forceful toward their bosses than the country has seen in decades, driven to the brink by the epidemic and sparked by the anti-police violence riots of 2020.

They are becoming more involved in labor unions, both in reform efforts inside the most influential US unions and outside the mainstream of organized labor. Around 4,000 grassroots union sympathizers, members, and activists who attended the Labor Notes convention in Chicago from June 17 to 19 claimed the increase.

According to Kylah Clay, a Starbucks barista and organizer with Starbucks Workers United, “I think we have the opportunity to make the word ‘union’ no longer some taboo word that we’re afraid to speak in the workplace.”

Climbing out of the rut

The American labor movement has been in decline since the 1980s. However, over the last two years, there have been indications that US labor may be regaining its footing.

Stephanie Luce, a professor of labor studies at the CUNY School of Labor and Urban Studies, said at the conference, “As someone who’s studied labor issues for the last 30 years or so, I’ve never seen anything like it in terms of the level of interest and excitement from people who want to fight back at the workplace.”

According to US pollster Gallup, union support is at its highest level since 1965, and union organizing appears to be spreading rapidly in the US. An increase in “Striketober” strikes in the private sector last fall at businesses like John Deere, Kellogg’s, and Nabisco further suggests that employees are once again eager to take part in protests at work. As the “most pro-union president overseeing the most pro-union administration in history,” US President Joe Biden has stated his intentions.

Progress is being made by organized labor. Workers at previously deemed unorganizable companies like Starbucks, Amazon, and most lately Apple have achieved remarkable victories. At the time of writing, employees associated with Starbucks Workers United had successfully won more than 150 of the almost 300 union elections they had sought in 35 different states and outlets.

A changing movement in a changed world

The maltreatment of employees by employers during the pandemic, according to labor experts, is frequently fatal. According to Luce, the epidemic was “the straw that broke the camel’s head.” “The pandemic merely served as the final straw that caused people to declare, “I’m done with this.” I won’t put up with this any longer. I’m not going to put my life in danger or injure my back.”

The extremely tight job market may be changing people’s attitudes for risk in workplace activity, according to Luce’s CUNY colleague and professor of urban studies Samir Sonti. Workers now find it less difficult to leave their jobs and obtain new ones, particularly in the service and hospitality sectors.

Thus, the so-called Great Reshuffle of the previous year, also known as “The Great Resignation,” in which millions of people changed positions, may contribute to the explanation of the growing labor movement.

Weiss says that the Black Lives Matter movement, which saw millions of people go to the streets to express their outrage after the killings of George Floyd, Breonna Taylor, Ahmaud Arbery, and many others in 2020, is another factor contributing to the increased activity of employees.

Large unions have historically conducted top-down organizing campaigns in the US, where unorganized workers follow the lead of union staff organizers. The most thrilling triumphs recently have flipped this relationship: Union personnel support and adhere to the workers’ lead as the primary workplace organizers.

According to Weiss, the Staten Island Amazon facility’s workers had one-on-one interactions with workers, disrupted captive audience sessions which led to the union victory.

Captive audience meetings are required gatherings where employers express their views on unions, frequently with the support of anti-union consultants who have been recruited. It was extremely beneficial to the endeavor to have workers present at the meetings so they could point out any factual errors or voice their pro-union feeling.

Weiss underlined the value of having organizers present in the break rooms. We had the chance to speak with the employees and let them know that supporting the union won’t get them fired.