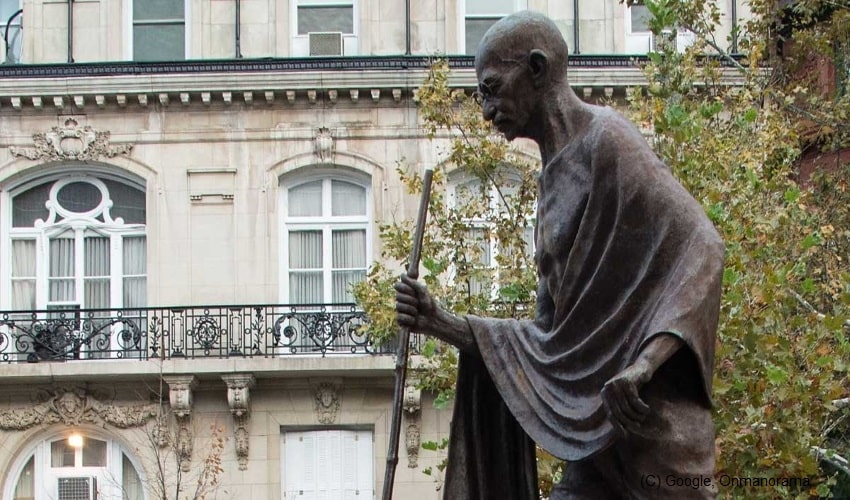 The peaceful protest organised by Sikh-American youths in support of Indian farmers was hijacked by the separatist elements of Khalistan.

On Saturday, hundreds of protestors gathered outside Indian Embassy, in Washington to protest in solidarity with the Indian farmers protesting on Delhi border for last few weeks, against the newly introduced farm laws by the Indian government. The demonstrators, came from different parts including Washington DC, Greater Washington DC, Maryland, Virginia, along with some from other states like New York, New Jersey, Pennsylvania, Indiana, Ohio and North Carolina.

The peaceful protest organised by Sikh-American youths in support of Indian farmers was hijacked by the separatist elements of Khalistan. Among the demonstrators, hooligans came who defaced Mahatma Gandhi’s statue located outside the Indian Embassy in Washington DC. Khalistan’ flags were spotted at the location. Besides, a yellow coloured flag was thrown over the statue’s head and anti-India cardboard cutouts and placards were pasted on it.  Besides, a dummy of Indian Prime Minister Narendra Modi was also found hung with a rope around the statue’s neck.

Indian embassy strongly condemned the act and issue a statement against it. The statement read, “The statue of Mahatma Gandhi at the Mahatma Gandhi Memorial Plaza in front of the Embassy was defaced by Khalistani elements on December 12, 2020. The Embassy strongly condemns this mischievous act by hooligans masquerading as protesters against the universally respected icon of peace and justice.”

Indian embassy has taken matter to the US law enforcement agencies and urged the Department of State to initiate an investigation to locate the culprits and prosecute them under the applicable law.

On June 26, the US outgoing President Donald Trump passed an executive order, which allowed the imprisonment of a culprit found involved in vandalising or damaging of a monument, statue or memorial for up to 10 years. The statue of Mahatma Gandhi was inaugurated by former Indian prime minister Atal Bihari Vajpayee in the presence of then US president Bill Clinton on September 16, 2000. It is not the first time that Gandhi’s statue was defaced, as it happened earlier on night of June 2 and 3.

Indian farmers protest is emerging as a strongest protest movement witnessed by the current era against the government’s push favouring capitalist forces. The country’s agricultural community believed that these newly introduced legislations favoured big corporations, leaving vulnerable farmers in a weaker spot. Modi government’s inability to take any definitive stand over the issue of Minimum Support Price (MSP) made farmers more anxious as it left more room to alter things in future. The three contested farm laws included – The Farmers’ Produce Trade and Commerce (Promotion and Facilitation), Act, 2020, The Farmers (Empowerment and Protection) Agreement of Price Assurance and Farm Services Act, 2020, and the Essential Commodities (Amendment) Act, 2020. Once passed in Indian parliament, the move was immediately met with strong opposition and protests all across the country. Soon the movement gained support from different parts of the world as well.