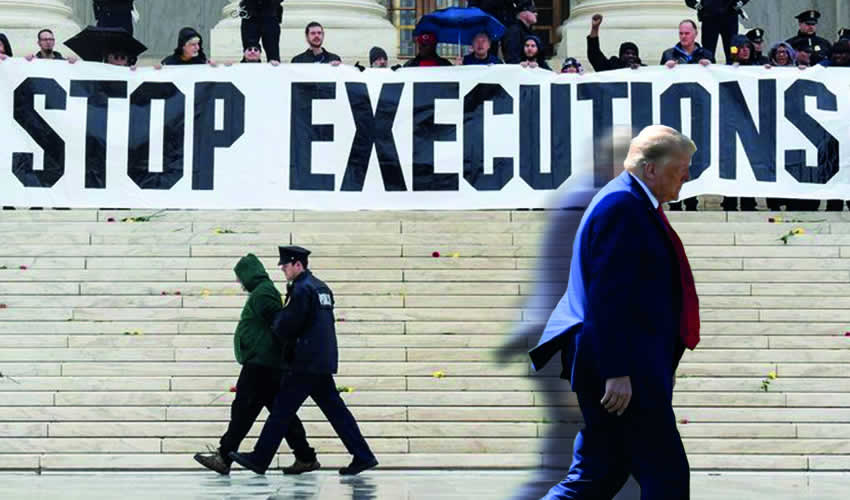 United States President Donald Trump is continuing his hasty streak of executions during last days of his presidency.

United States President Donald Trump is continuing his hasty streak of executions during last days of his presidency. This is not only inviting criticism from his critics and opponents but also setting him against the tide of decreasing support for executions in multiple states across the US. American public too is rejecting the idea of giving death penalty to convicts. While still a large number of states are giving death penalties and maintaining executions, majority of others along with public support are vehemently shrinking the number of executions.

According to Gallup Survey that was published last month, more American people now oppose death penalty as opposed to what did about half a century ago. Although, still 55% of Americans support execution of criminals who have been convicted for murder, the number is at its lowest since 1972, when 50% supported death penalty pactice.

#BrandonBernard, 40, whose death row case drew frantic pleas for mercy from activists and celebrities alike, has been executed by lethal injection in Trump's manic quest to cause as much death as possible on his way out the door. #TrumpDeathToll300Khttps://t.co/1gIGUDMbPa

Describing Trump’s latest quest of ordering executions as “a spree that is breathtaking”, Ngozi Ndulue, senior director of research and special projects at the Death Penalty Information Center (DPIC), Washington DC said, “The federal government has shown itself to be out of step with the states and out of step with history.”

The death penalty has been an abject failure. It discriminates based on the color of your skin or how much money you make. It’s ineffective, irreversible, and immoral.

From last Thursday to January 20 when Trump leaves the White House, five executions are scheduled. This brings a total of 13 federal executions since July. This engraves Trump’s name as “execution President” in American history.

Past 10 years have seen 10 American states to have abolished the practice of giving death penalty or have put a moratorium on federal executions.

Human rights groups also point out the widespread discrimination against people of color who are given death penalty more commonly as compared to white American convicted of the same offense. Also if the victim was white and offensive a man or woman of color, the accused is more likely to receive a death penalty. Ndulue says, “The way that the death penalty is allocated in the US is inextricable from our legacy of racial injustice.”

Ndulue calls Trump’s strategy of executions as “execution at all costs”.