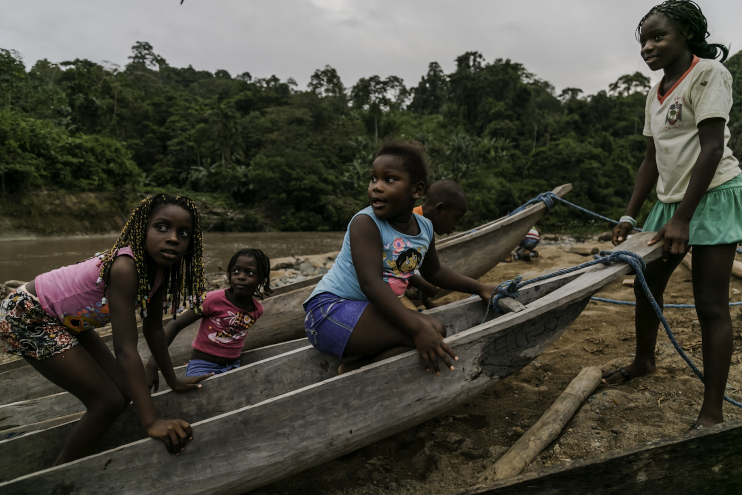 Wimbi is the only community in its vicinity that has not sold its properties to the palm industry. The population affirms that these lands are ancestral because they have inhabited them before the Ecuadorian State existed.

The black population in Ecuador is victim of serious episodes of racism that manifest themselves not only through stereotypes and linguistic expressions but also through territorial isolation. Black people in Ecuador live in the poorest provinces in the north of the country and excluded from social, economic and political life.

Poverty and violence are a direct consequence of exclusion: 70% of the Afro-Ecuadorian population lives below the poverty line and in more than 92.7% of cases they do not have basic services: health care, protection, education.

The main victims of the marginalization are women, often without access to health services or structures in charge of education and training and are forced to do the humblest jobs. This situation is even more serious if we think that women have to take on the economic responsibility of the family on their own.

Furthermore, widespread illiteracy often involves the lack of awareness of one’s rights and consequently the occurrence of episodes of discrimination but also of violence within the family itself. Furthermore, the difficulty in accessing health services causes the high maternal mortality rate and the spread of diseases typical of poverty.

Ecuador must implement and enforce laws and policies to protect the rights of Afro-Ecuadorians, the UN Working Group on People of African Descent said last December, calling for an end to the “discrimination, exclusion and extreme poverty they suffer.”

After visiting the country, the independent UN human rights experts concluded that the Government must step up efforts to enforce the law and implement plans to end racial discrimination suffered by Afro-Ecuadorians and people of African descent.

With systematic contamination of the environment and their water supplies, intimidation of their communities, and an insufficient response by the State, people of African descent are also suffering environmental racism.

Independent experts, appointed by the Geneva-based UN Human Rights Council, concluded that “the State should not remain indifferent to human rights abuses and violations by extractive industries and other companies”, but instead “end impunity for human rights violations and environmental racism”.

This is a topic that’s near to my heart…
Thank you! Where are your contact details though?