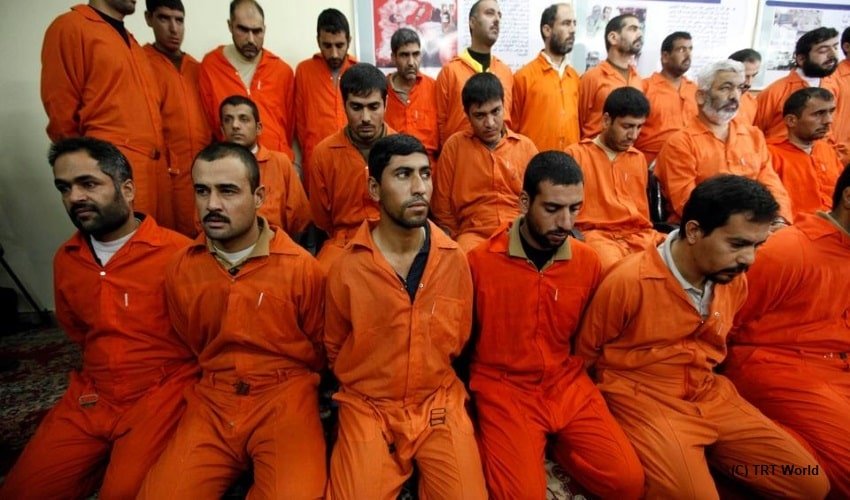 On Monday Iraq’s internal ministry issued a statement confirming the execution of 21 individuals and lending an explanation for the act of mass executions adding that those hung were linked to the ISIS.

On Monday Iraq’s internal ministry issued a statement confirming the execution of 21 individuals and lending an explanation for the act of mass executions adding that those hung were linked to the ISIS. The statement said that the executions were carried out at a prison in the southern Iraqi city of Nassiriya. It added that the death penalty was given to the perpetrators who were involved in two suicide attacks, which killed dozens of people the northern town of Tal Afar.

The authorities did not reveal the identities of the executed convicts. This got the attention of rights group, who raised voice against what they referred as “partial justice”. The Iraqi authorities have been conducting mass executions as part of its military campaign against the Daesh group, since 2014 to 2017. The campaign was highly supported by US forces.

#Iraq: It is high time the authorities put an end to executing people. Retaliatory executions not only fail to deliver justice to the victims and to their families, but they serve to reinforce perceptions of partial justice.https://t.co/239YLVZBNQ

Amnesty International slammed Iraqi government for conducting mass executions in the name of justice and compromising the process though flawed trials leading to unfair convictions. Though Iraq contested that their trials were fair.

In response to gross violation of human rights by Iraqi authorities, Lynn Maalouf, Amnesty International’s Deputy Regional Director for the Middle East and North Africa, said: “It is high time the Iraqi authorities put an end to executing people. Retaliatory executions not only fail to deliver justice to the victims and to their families, they serve to reinforce perceptions of partial justice, at a time when the authorities are mum in regards to other serious violations such as torture and enforced disappearances that are still taking place across the country.

At a time when the authorities are pressing ahead to close the chapter of the conflict with IS, they should ensure they are not doing so by perpetuating the sort of actions that have been highlighted as the seeds of previous cycles of violence – which yesterday’s tragic execution is a stark example of.

Daesh fighters had taken over a third of Iraq in 2014, with an aim to establish caliphate and were later defeated both there and in neighbouring Syria over the next three years.

The U.S. renew support for UNICEF’s mission to protect children in Libya

how to make custom silicone wristbands

I think that is among the so much vital information for me.
And i am satisfied studying your article.
But wanna remark on few common issues, The site taste is perfect, the articles is truly excellent
:D. Just right task, cheers.

Undeniably believe that which you stated. Your favorite reason seemed
to be on the net the simplest thing to be aware of.
I say to you, I definitely get annoyed while people consider worries
that they just do not know about. You managed to hit the nail upon the top and defined out the
whole thing without having side-effects , people can take a signal.

Will likely be back to get more. Thanks

I like the valuable information you supply on your articles.
I’ll bookmark your blog and test once more here frequently.
I am somewhat certain I will be told many new stuff right here!
Good luck for the next!