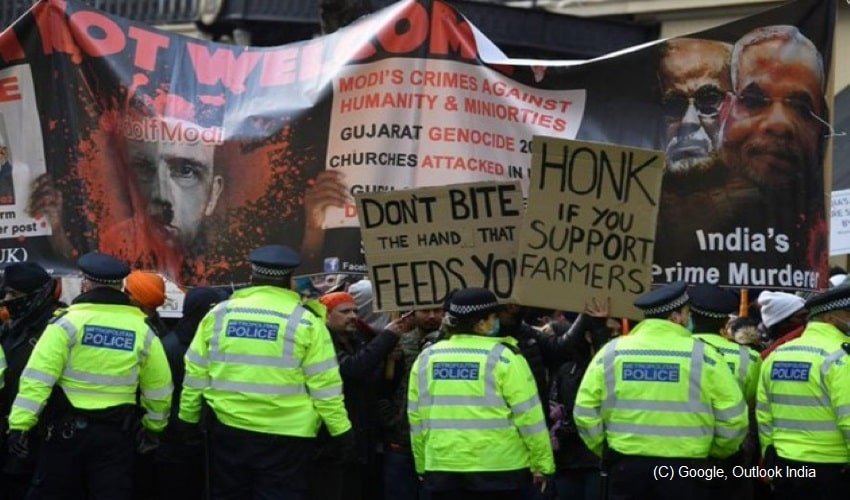 On Sunday, the demonstrators standing in solidarity with farmers protesting outside Delhi, in India, gathered outside Indian High Commission in London.

On Sunday, the demonstrators standing in solidarity with farmers protesting outside Delhi, in India, gathered outside Indian High Commission in London. The police tried to control to protesting crowd to make sure social distancing norms were adhered to. The demonstrators held banners reading “justice for farmers”. The protestors also raised slogans anti-India and pro-farmers.

They gathered to show their support for the farmers who had been protesting for weeks now against the newly introduced agricultural laws by central government. The demonstration was held following the appeal by 36 British MPs from various parties, urging British Foreign Secretary Dominic Raab, to take up the matter and discuss with Indian foreign secretary Harsh Vardhan Shringla. Many of the British MPs were of Indian origin, while others represented many constituents which were somehow linked to Punjab.

The BJP ruling government has yet not taken any definitive stand over the issue of MSP which is why farmers are more anxious as it leaves more room to alter things. The country’s agricultural community believed that these newly introduced legislations favoured big corporations over vulnerable farmers.

The three contested farm laws included – The Farmers’ Produce Trade and Commerce (Promotion and Facilitation), Act, 2020, The Farmers (Empowerment and Protection) Agreement of Price Assurance and Farm Services Act, 2020, and the Essential Commodities (Amendment) Act, 2020. Once passed in parliament, the move was immediately met with strong opposition and protests all across the country as the legislation was passed without the consent of opposition leaders.

The protest has been gaining momentum not only within the country but all across the world. Last week, Canadian Prime Minister, Justin Trudeau expressed his concern and support for the farmers ‘Dilli Chalo’ protests, despite being condemned by India’s Ministry of External Affairs (MEA) for the same.

Besides, Indian intelligence told MEA that the Sikh separatist group, Sikhs For Justice (SFJ) has called for ‘shutting down’ of Indian embassies in London, New York and Toronto on December 10. Intelligence agency believed that they were encouraged by support showed by various countries and world leaders including Trudeau, United Kingdom MPs and representative of UN Secretary-General supporting the farmers’ protests in India.

We have given the call for shutting down Indian consulates on UN Human Rights Day to expose India’s 70-year policy of ‘Sikh genocide to farmers’ econocide’ to the world community.” The matter is taking sensitive turn on world arena.