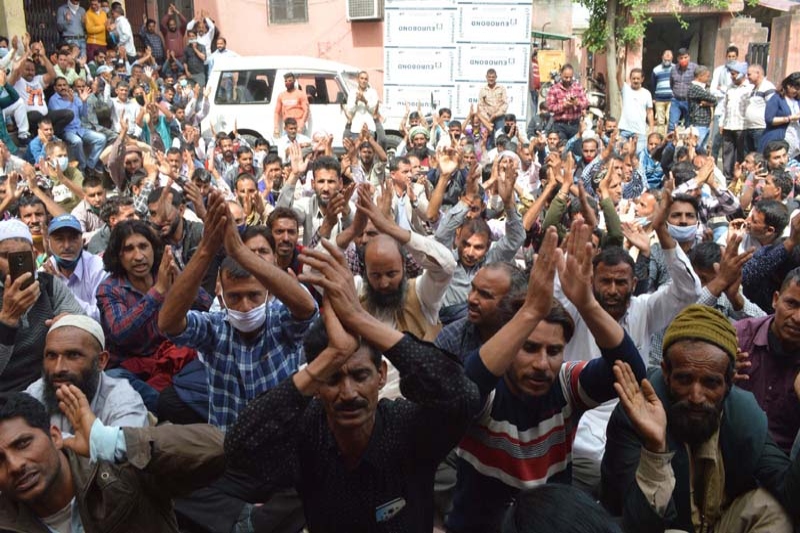 They were marching towards Raj Bhawan to submit a memorandum of their various long-pending demands. However, police stopped them at Indira Chowk. Reportedly, senior police and civil officers, including the additional deputy commissioner of Jammu, motivated the protesters to disperse.

The workers assembled at Jal Shakti headquarters on BC Road. They reportedly chanted slogans in support of their demands. The protesters came from different districts of the union territory, including Srinagar.

They attempted to move towards the Raj Bhawan but were prevented by the policemen. Police officers persuaded the protesters to hand over the memorandum of their demands to them. Police officers assured them that they will look into the matter.

After more than two hours of persuasion, the protesters returned to their headquarters. However, they threatened to protest again if their demands were not met.

Dinesh Sharma, one of the leaders of Public Health Engineering (PHE) employees united front, said that the workers have been serving the department for the last 25 to 30 years on a meagre amount. The workers want regularization, implementation of the Minimum Wages Act, and release of pending salaries.

More than 60,000 daily wagers, casual labourers, and other workers performing their duties in various departments of Jammu and Kashmir are regularly protesting in both Jammu and Srinagar to put forward their long-pending demands.

Last week, the casual labourers held a demonstration in support of their pending demands near the Press Club of Jammu. They also chanted slogans in support of their demands. They demanded the implementation of the Minimum Wages Act. They reportedly said that the administration has miserably failed to uphold the commitment made with 61000 casual labourers of all the departments.