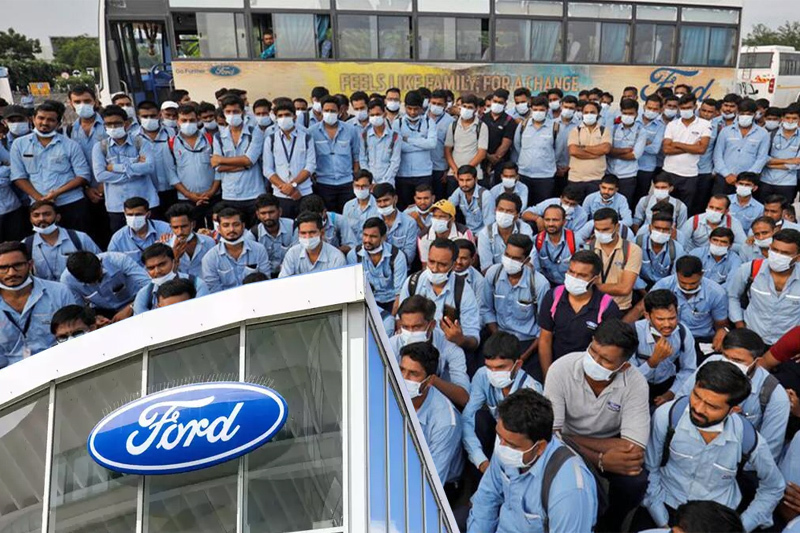 India – Over 400 of the 2,600 employees who worked at Ford’s Chennai assembly plant before it was permanently shut down nearly three months ago are still protesting the “final settlement” severance deal that company and union authorities unilaterally imposed on them.

The Chennai Ford Employees Union (CFEU) has completely abandoned the workers, and they are now acting independently to seek the return of their jobs or the provision of equivalent employment. The majority provide all or the majority of their families’ income.

On July 20, the final sport utility vehicle came off the manufacturing line at Ford’s facility in Tamil Nadu, a state in southern India.

A “last” severance deal including what the US-based transnational automaker claimed was the equivalent of 130 days’ “gross pay” for each year of service was revealed on September 5. This took the form of a demand.

The employees had until September 23 to agree to this, failing which Ford might “retrench staff and pay the statutory minimum of 15 days for each completed year of employment,” according to the Hindu Business Line.

At the time, CFEU leaders claimed to be fighting for 215 days of compensation for every year of service despite having long since abandoned even the most minimal opposition to the shutdown of the factory. However, on September 20, the union accepted Ford’s offer of 140 days for each year of service, or 75 fewer days than its purported original demand, without consulting or getting the consent of the rank-and-file workforce.

According to Ford management, salaries might be as low as Rs. 3.5 million ($42,000) and as high as Rs. 8.7 million ($106,000). According to the business, this equates to an average of 62 months of pay for each employee. Given that many of the employees are younger and have low levels of experience, the median wage is not mentioned.

More than 200 workers, united by the banner of the Chennai Ford Workers Rights Group, assembled on September 26 at Valluvarkottam, close to Chennai, outraged by such treachery (CFWRG). As a result of the union’s suppression of their fight against the closing of the plant and the imposition of a severance package imposed by Ford, they took it upon themselves to create the CFWRG.

By abruptly halting a five-week walkout that the employees had launched against the looming closure—again, on their own initiative—the CFEU betrayed the workers. The CFEU allowed the company to deploy a small number of workers to construct a last batch of automobiles after ending the strike on July 2. Most of the previously on strike workers went back to their home towns and villages because they had no work or income.

Because of their isolation, several of the most militant workers—now prominent CFWRG members—turned to the Left Trade Union Centre (LTUC), which has Maoist roots, for guidance and assistance.

The LTUC prides itself on being a more militant union than many others, even those connected to the Stalinist-run Centre of Indian Trade Unions (CITU), which is a political partner of the right-wing ethno-nationalist DMK government in Tamil Nadu. In reality, however, the LTUC operates in a very similar manner, advising workers to file complaints with bureaus of the bourgeois political system like the state labour commission or the courts.

It was advised that on September 30, during a public appearance, the Ford employees present Tamil Nadu state Chief Minister M.K. Stalin with a petition requesting their jobs. At the inaugural ceremony of a factory not far from Maraimalai Nagar, where the Ford Chennai assembly plant is located, Stalin served as the keynote speaker.