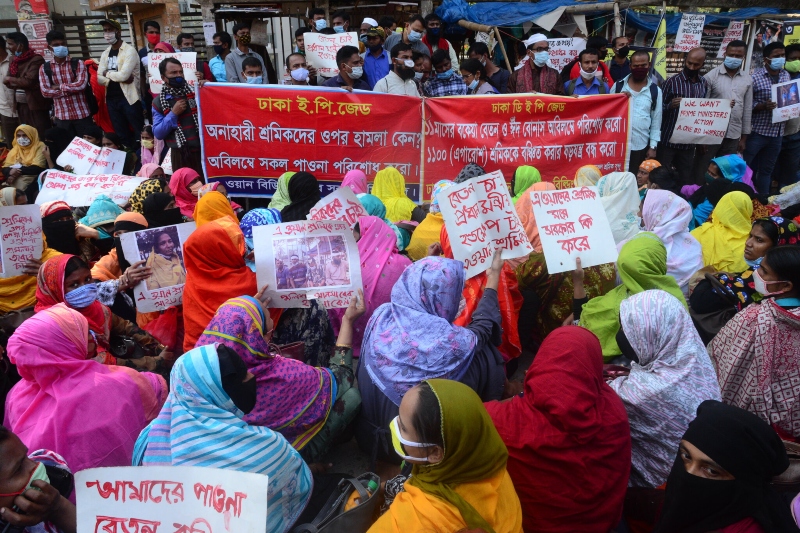 Bangladesh – At different events in Dhaka on Friday, various workers’ rights organizations urged the government, mills, and factory proprietors to pay workers’ wages and festival allowances prior to Eid-ul-Fitr.

In a press statement, the Sramik Karmachari Oikya Parishad, a coalition of 14 labor rights organizations, demanded that the government pay workers’ salaries and festive allowances before Eid-ul-Fitr.

And many other Labor leaders also signed the statement.

Garment Sramik Samhati wanted full salary for garment workers in April at a protest next to the National Press Club, as well as a festival bonus equal to a month’s basic pay a month before Eid.

Statement by President of Organization

The gathering was chaired by Taslima Akhter, the organization’s president, who stated that because garment industry workers are low-paid, they will not be able to celebrate the Eid celebration if they do not receive full pay in April.

Taslima Akhter also asked that workers’ paychecks and festival allowances be paid by the 20th of Ramadan.

Julihasnyaneen Babu, Anjan Das, Babul Hossain, and other central leaders spoke during the gathering, which was attended by many people.

A protest procession followed the rally, which marched down several downtown streets.

Vice President of the Organization

Abdur Razzak, the organization’s vice president, who presided over the protest, stated that if workers are not given their wages and festival allowances on time, they will be unable to celebrate Eid with their families.

Essence of the Rally

The protest was preceded by a rally procession that marched through the streets of the city.

Leaders stated that workers are already underpaid. They won’t be able to celebrate Eid if they don’t receive their full pay in April.

The rally conveyed that workers should be paid their wages and festival allowances before Eid-ul-Fitr, according to the Socialist Labor Front, which held a protest march next to the National Press Club.