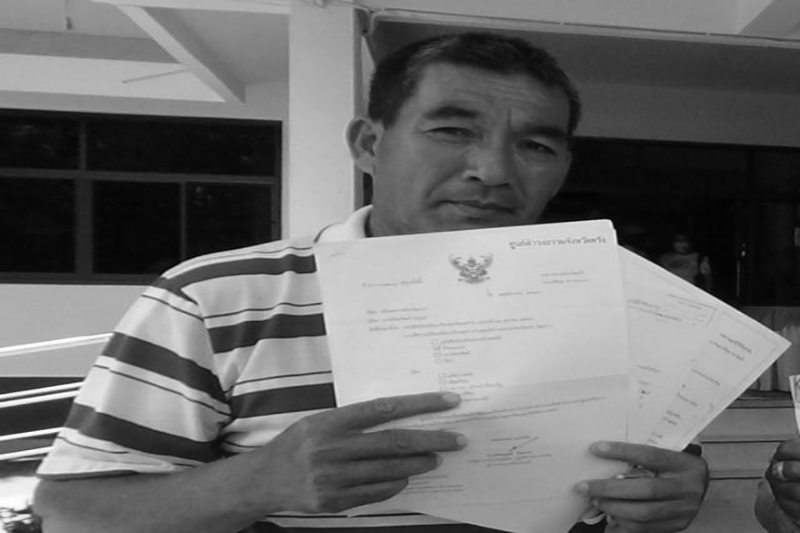 The international rights watchdog said successive Thai governments have completely failed to prevent or properly respond to attacks against human rights defenders who try to be the voice of landless farmers.

It is reported that at about 7:40 a.m on May 4, 2021, an unidentified gunman fatally killed Somsak, 54, while he was at work in a rubber plantation close to his home in Trang province, Wangviset district.

He had reportedly told his family that he was being followed and was being hurled with death threats. Local authorities, however, neither investigated these warnings nor took any measures to protect him.

Asia director at Human Rights Watch, Brain Adams said: “Thai authorities should not keep mum while grassroots activists in southern provinces are being killed just for standing up for their communities”.

“The Thailand government should immediately conduct a credible and impartial probe and bring the responsible of Somsak’s death to the due course of law and justice,” Brian maintained.

Somsak had recently led a campaign for the poor villagers’ right to agricultural land in his district.

Over the last five months, conflicts have surged in the area between local villagers who occupy oil palm plantations that have no longer valid leases with government agencies. These occupiers are backed by local politicians.

Community members have told the US-based rights agency that police investigations into Somsak’s murder have been half-hearted and ineffectual so far.

During the last 10 years, nearly five land rights activists in southern Thailand have been gruesomely murdered.

All were leading campaigns seeking community ownership of agricultural lands, which had been in the use of palm oil companies, which had expired their lease contracts with the government.