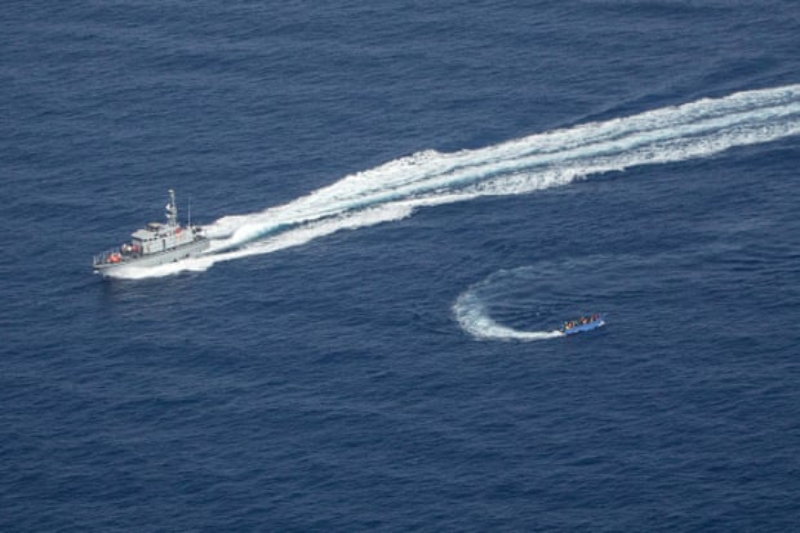 German organization Sea-Watch has released a video that shows Libyan coastguard’s patrol vessel firing shots at and trying to ram a small wooden boat in an attempt to force the vessel back to Libya. The video was recorded by research workers of NGO as the boat carrying migrant families was in distress in Mediterranean Sea after being fired at by the Libyan coastguard.

On Wednesday, the Sea-Watch released a statement, “During our mission with our Sea-Watch reconnaissance aircraft Seabird on June 30, at 1.39pm, we overheard communication about a position of a boat carrying 50 people and many children inside the Maltese search and rescue zone.” The pilot then saw Libyan coastguard boat that has been supplied by Italy to assist Tripoli in its migrant crisis through Mediterranean. “Seabird flew towards the case and spotted the so-called Libyan coastguard vessel PB 648 – Ras Jadir.”

Sea-Watch then spotted the blue wooden boat carrying migrants being pursued by Libyan coastguard. This is when Sea-Watch contacted rescue coordination centre in Malta and asked it to intervene. “We witnessed the brutal attack by the so-called Libyan coastguard and recorded the situation before leaving the scene due to a shortage of fuel,” said Sea-Watch.

The video issued shows coastguard vessel firing at least 2 shots at the migrant boat carrying dozens of women and children, and then trying to ram them. “Europe’s partners of the so-called Libyan coastguard are approvingly accepting the death of people on the move,” said Felix Weiss of Sea-Watch’s Airborne Operations.

“Those who shoot at refugees and try to capsize their boats are not there to save them. The EU must immediately end cooperation with the so-called Libyan coastguard. European states like Malta must take back responsibility for their rescue zones and fulfil their duty to rescue.”

Migrant boat was fortunately able to dodge attacks and avoid interception, then arriving next day on island of Lampedusa.