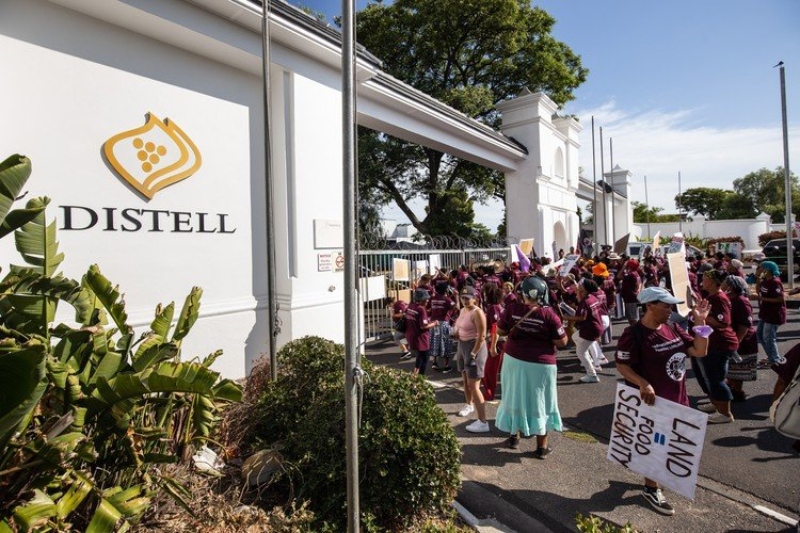 South Africa – The famous brew and wine maker, Distell is facing trouble as its farm workers are up and arms against the low wages. Almost 150 women flocked the gates of the factory entrance demanding fair wages. Most of these women live and work on the farms where they prune and produce fruits of the liquors produced by Distell. Along with members of the Women on Farms Project (WFP), all these women marched to Distell in Stellenbosch (South Africa) in protest.

Distell produces many well-known alcoholic drinks like Savanna, Amarula, Klipdrift and a range of wines. Amongst their other demands is that Distell prevent and mitigate labour and housing rights violations committed by its suppliers. Most women workers also want the company to provide the Women on Farms Project with a list of all of its supplying farms, among other demands.

It is shameful to see how Distell is publicly celebrating its profits while seasonal workers who actually produce and harvest the produce are bracing themselves for tough months ahead. It is becoming increasingly evident that suppliers continue to ignore and disregard human rights of the farm workers.

Many workers on farms across the Western Cape regularly experience labour rights violations, as well as a lack of sanitation, forceful evictions, and food insecurity, according to the Women on Farms Project (WFP) which coordinated the march.

Stated under a memo, these conditions have been put across to the Distell management. Further, the farmer community is also demanding now that the company should publicly commit to the redistribution of farmland to women farmworkers as well; and also commit to meeting with the WFP to discuss their grievances in detail. A Distell representative as of now has accepted and signed the memo. In reality, many women working on farms are still paid below the minimum wage and are at a greater risk of being evicted from their homes. In response, the Distell spokesperson Dennis Matsane has said that the conditions and pay at all Distell-owned farms has always “far exceed the prescribed standards”.