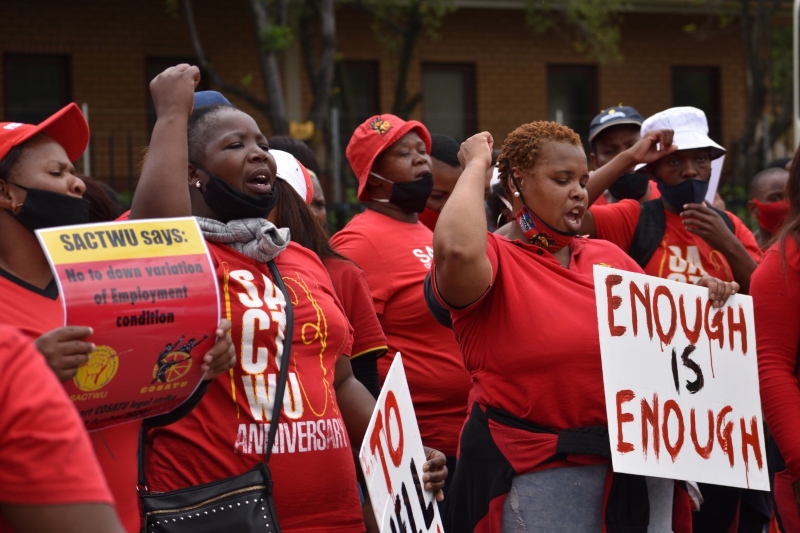 South Africa – On Wednesday, the members of Cosatu-affiliated Southern African Clothing and Textile Workers’ Union (Sactwu) assembled in Cape Town, raising their voice against the proposed labor law amendments. These amendments were recently tabled at the National Economic Development and Labour Council (Nedlac). The protests were held in front of Southern Sun Hotel of Cape Town, where Sactwu’s National Bargaining Conference was being conducted at the same time.

“As Cosatu, we are deeply angered that the Department of Employment and Labour has tabled a shopping list of proposed amendments to our labour laws at Nedlac. These laws will gut all the progressive laws that unions have struggled to win for workers over many decades,” said Cosatu deputy president Mike Shingange, who was present at the protest.

Proposals by government through new amendments include “exemption of SMMEs from collective bargaining, reduction in retrenchment payments, extension of probation periods for new workers and removing protections from dismissals and retrenchments rights from them, as well as allowing for dismissals to be expedited”.

Shingange noted that these labor law amendments are going to reduce or remove rights and protection of workers above an income and those who are considered to be white collar workers. Furthermore, the amendments would also increase national minimum wage exemption to 30 per cent from current 10 per cent. “These proposals happen while the Ministry for Employment and Labour only increased the Basic Conditions of Employment Act annual income threshold twice since 2014,” he said.

Sactwu national collective bargaining officer Fachmy Abrahams added, “We have come through hard fights and we are proud that as a country we protect and respect worker rights; what is happening now is that these proposals want to roll that back and that is not something that we as organized labour are going to stand for.”

Though the proposal of law amendments is still in early days, Abrahams stressed that it is crucial to show discontent right from beginning and raise voice against the proposal as Cosatu has already initiated discussions on these proposals. “We should strengthen worker rights, not erode them,” Abrahams stressed.