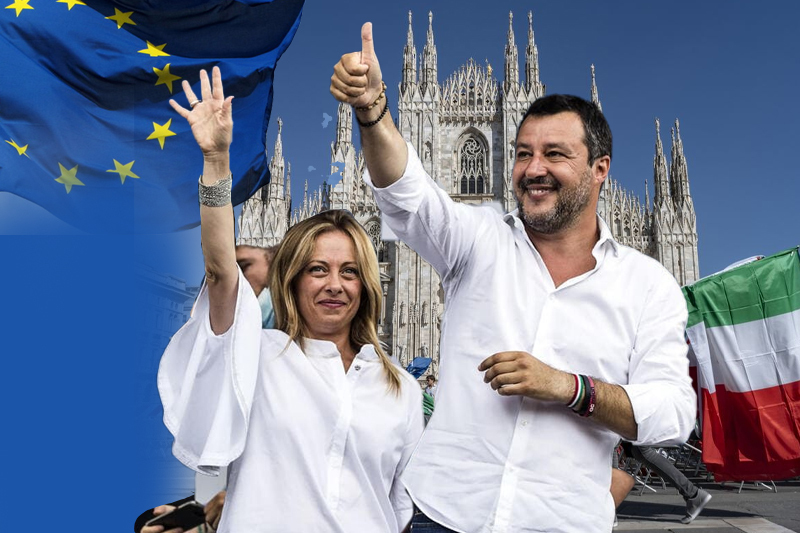 from eu to immigration

Italy – The far-right Brothers are predicted to win 26 percent of the vote in Sunday’s poll, with coalition partners Matteo Salvini’s Anti-Immigration League and Silvio Berlusconi’s right-wing Forza Italia each gaining enough support to give the alliance a parliamentary majority. A right-wing coalition led by Georgia Meloni’s Brothers of Italy party won the country’s general election.

The results will be confirmed on Monday, when a new government, the most right-wing since World War II, should be in place by mid-November.

Here are the main points of the joint program, which the coalition partners agreed on the eve of the election campaign. The scale of Meloni’s success – number one in the polls, well ahead of her allies – is likely to influence how the policy is implemented.

Salvini and Berlusconi have long been close to Russia, but the coalition agenda emphasizes respect for NATO commitments and, key for Meloni, support for Ukraine in the aftermath of Russia’s February 24 invasion. It also supports all initiatives to find a solution to the conflict.

Since Meloni’s and Salvini’s parties are Eurosceptic, the program commits itself to “totally follow the process of European integration”, aiming for a “more political and less bureaucratic” bloc. He also calls for a review of EU rules on public spending and economic management. In addition, he calls for the protection and promotion of European “Judeo-Christian” and classical roots.

The right-wing coalition has said public safety is a priority, promising to fight everything from petty crime to the mafia, violence against women, and the sale and distribution of illicit drugs. They also pledged to fight all forms of anti-Semitism and Muslim fundamentalism.

Immigration was an important part of Meloni and Salvini’s campaigns, with promises of stricter border controls, blocking boat landings, and the establishment of EU-run centers outside the bloc to process asylum claims.

At the same time, they said they would manage legal migration more orderly, including programs to include new arrivals.