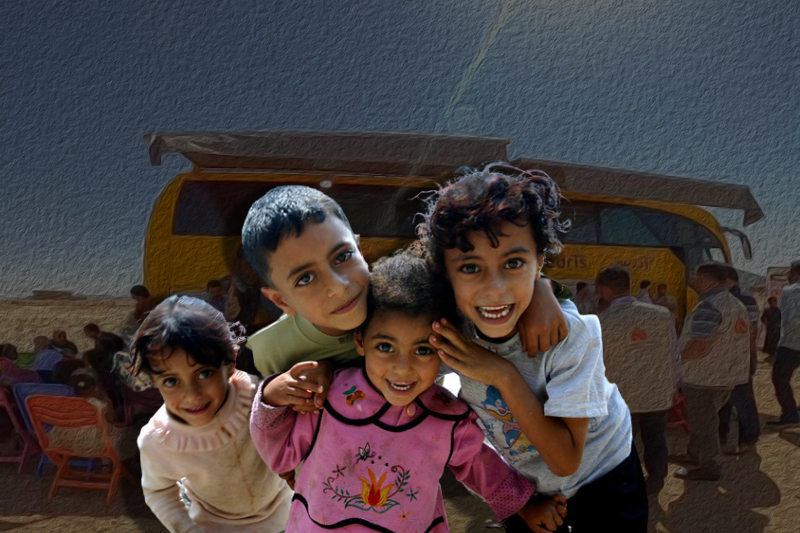 Yemen – Edris, the big yellow school bus, when pulls up into the desert camp of Yemen, the excitement can be seen on faces of innocent Yemeni children. Doaa Yehia, the eight year old girl hasn’t been to school since her family tried to escap civil war and last year left their home in northern Yemen.

Doaa, who is living in Mafraq refugee camp in Hardramawat’s Al Abr district in eastern Yemen, is more than 7 miles away from nearest school. Edris, as the school bus is fondly known, is a hope for many children like Doaa in Yemen who are unable to get education from schools. “It’s so great to be back at school,” she says as she runs to a class.

According to UNICEF data, at least 2 million Yemeni children have been devoid of education due to conflict. The conflict has led to over 460 schools being attacked across the country. Furthermore, over 2500 schools have been damaged and are now being used by armed groups for non-educational purposes.

Edris – providing education to the Yemeni children amid crisis

For last three months, children are gaining education sitting on colourful chairs outside the bus under shade or sometimes inside the bus. Studying from 8 am to noon, except Fridays, 94 children have received education in Arabic, Islamic studies, mathematics and science.

The bus has been funded by Kuwait’s Rahma International Association along with local authorities. The objective is straightforward – provide education to scores of Yemeni children who have been displaced due to civil war.

Mafraq camp has been the first refugee camp to be visited by Edris, as it hosts the maximum number of displaced families – 309. “We gave priority to older children, as we could not take them all in due to the limited capacity,” says Abduljabar Mohamed al-Dharasi, who manages the camps for displaced people in the district.

It is expected that five more buses with trailers are expected to join the fleet and visit camps in Hadramawat and neighbouring Marib governorate in the next month, said Ra’ed Ibrahim, chairman of Al-Twasul for Human Development, the local NGO that is running the mobile classrooms.