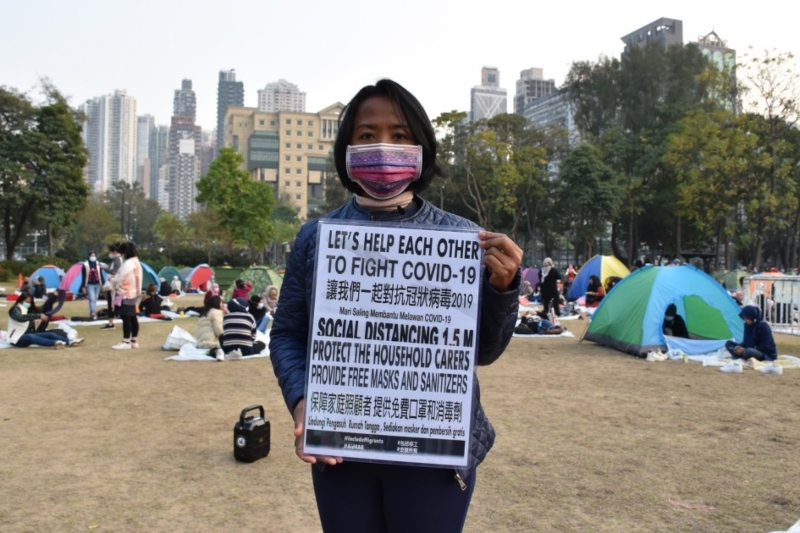 Hong Kong – A 35-year-old migrant worker has been living on the streets of Hong Kong for two nights after she tested positive for Covid-19.

She was scheduled to fly back to the Philippines on Wednesday. However, her visa application was denied by the authorities and she tested positive for Covid-19. The migrant worker told Hong Kong Free Press (HKFP) on Thursday that she had been living in a park in Yau Ma Tei since Tuesday.

She was told by the hospital to undergo home quarantine because the hospital was at capacity. Unfortunately, she did not have a place to return because she had resigned from her previous employment over living conditions. The employer did not provide her with good accommodation. She was also denied a visa to work for a new employer. Domestic workers must legally “live in” with their employers in Hong Kong.

The migrant worker reached out to the Hong Kong Federation of Asian Domestic Workers Unions (FADWU) for help because she didn’t have anything to protect herself. FADWU provided her with a tent, a sleeping bag, facemasks, some cleaning supplies, and some food. The group warns that the incident is an “emerging crisis.”

Reportedly, the migrant worker was freezing for two days because of the weather. Temperatures in Hong Kong dropped to 10 degrees Celsius during the weekend. According to HKFP, the migrant worker had to sleep on the floor next to a shoe cabinet, washing machine, and dryer.

In a press statement addressed to the Director of Immigration Au Ka-wang, the migrant workers’ support group said they tried calling the Centre for Health Protection (CHP) for help, but the line was occupied. Subsequently, the group tried calling the Home Affairs Department’s “StayHomeSafe” hotline. However, they were told that the hotline only provides support to home quarantine people.