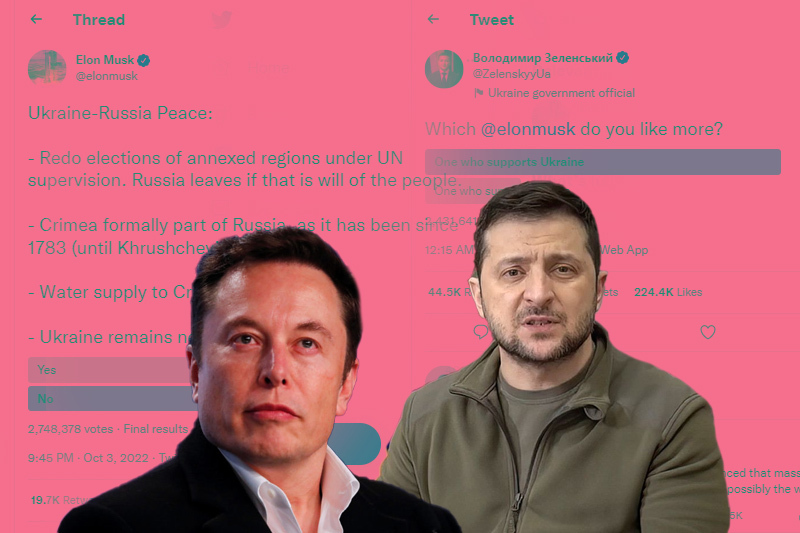 zelensky and musk in row over ukraine ‘peace plan poll’

Ukraine – Ukrainian President Volodymyr Zelensky responded to Elon Musk after the head of Tesla posted a poll on Twitter with his proposals to stop the Russian invasion. Musk asked his 107.7 million followers to vote on ideas that included ceding territory to Russia.

In response, Mr. Zelenskiy released his own poll asking users if they liked the world’s richest man more when he supported Ukraine.

Other Ukrainians criticized Musk. The outgoing Ukrainian ambassador to Germany, Andriy Melnyk, used a strong expletive, which he described as his “very diplomatic response.”

Meanwhile, Russian grandmaster Garry Kasparov declared: “This is moral idiocy, a repetition of Kremlin propaganda, a betrayal of Ukrainian courage and self-sacrifice.”

Musk’s ideas included votes in the Russian-occupied territories of Ukraine, which the Kremlin says he is annexing. The multi-billionaire said: “Russia will leave if it is the will of the people.”

President Vladimir Putin has already declared four regions of Ukraine part of Russia after so-called referendums that Kyiv and its Western allies have called a scam. Russia does not fully control any of the four regions.

Mr. Musk suggested that the world officially recognize Crimea, annexed by Russia in 2014, as part of Russia.

But Ukrainian Foreign Minister Dmytro Kuleba tweeted: “Those who propose Ukraine to give up on its people and land – presumably not to hurt Putin’s bruised ego or to save Ukraine from suffering – must stop using the word ‘peace’ as an euphemism to ‘let Russians murder and rape thousands more innocent Ukrainians, and grab more land’.”

Within 10 hours of being published, Musk’s poll garnered over two million votes.

Mr. Zelenskiy responded with his own poll: “Which @elonmusk do you like more? One who supports Ukraine [or] One who supports Russia.” Eight hours after it was posted, the poll received over 1.5 million votes.

Earlier, during the Russian invasion, Musk’s satellite Internet company sent equipment to Ukraine. This made Mr. Musk popular in Ukraine, and Mr. Zelensky subsequently invited him to visit the country when the war with Russia ended.

The businessman posted his poll during a busy week when he is due to testify to lawyers speaking on Twitter’s behalf ahead of a trial due to begin on October 17. Twitter is suing Mr Musk after he backed out of a $44 billion deal to buy the social media platform. Twitter is hoping a Delaware court will order Musk to complete the takeover at an agreed price of $54.20 per share.

How to engage your hiring managers in the collaborative hiring process