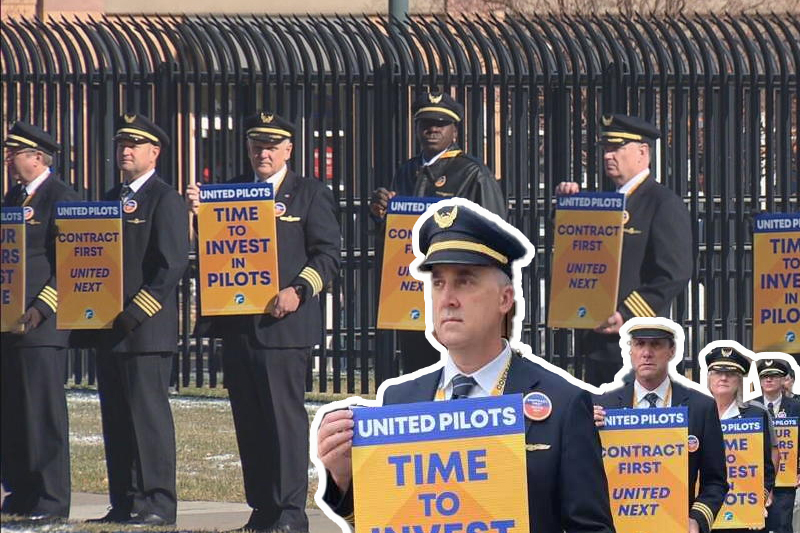 Even though it was a miserable morning with fog and drizzle, hundreds of United Airlines pilots, flight attendants, and aviation mechanics marched silently through downtown Houston.

The United Airlines board of directors assembled at the Four Seasons Hotel in hopes of negotiating new worker contracts during a key period in the industry.

Paul Ryder is the secretary of the AirLine Pilots Association’s United Master Executive Council. He asserts that workers desire not only higher money but also a higher quality of life.

“The emphasis for United pilots is our total value, which includes not only remuneration but also work-life balance,” added Ryder. “We want to be able to spend as much time with our families as we do with our passengers.”

Many of the participants were United employees stationed in Houston, while some took the time to fly in particularly for the rally. Ryder stated that they desired to communicate directly with the most influential decision-makers.

United Airlines said lately that it intends to invest up to $37.5 million in a biofuel refinery in Northwest Oregon. Ryder stated that the airline is investing in many areas, but not in their pilots.

“This is what we anticipate for today: an investment and a decision to move forward with a contract that recognizes the contribution our pilots have made every day, not only on regular business days for the airline, but also throughout the entire pandemic, in order for United to emerge as an industry leader.”

There have been several airline employee and pilot demonstrations around the United States, and contract discussions are presently underway with the four largest airlines in the country.

The Airline Pilots Association, which represents more than 14,000 aviators at Delta Airlines, has reached a tentative agreement with the airline that would result in a 34% pay rise over the four-year duration of the contract. Since the epidemic, the airline pilot shortage that has plagued the aviation sector has become worse.

Ryder asserts that in the future, United employees just desire to be recognized.

“We wish to contribute to the solutions. United Airlines is an industry-leading airline because of its pilots and other personnel. We intend to be a part of that discussion, and we aim to prevent this situation in the future with a timely contract. But for now, we need management to see that pilots are unified and determined to accomplish the desired result.”