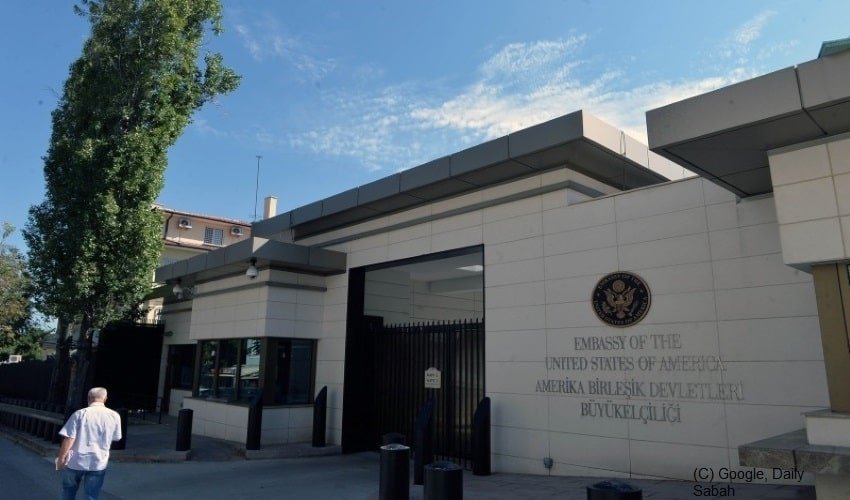 The U.S. Embassy in Turkey published a new statement following the visit of Ambassador Khalilzad and his voyage in the region to garner support for Afghanistan Peace Negotiations

The U.S. Special Representative for Afghanistan Reconciliation Ambassador Zalmay Khalilzad arrived in Ankara on December 3 to discuss with Turkish counterparts support for Afghanistan Peace Negotiations. The ambassador also travelled in Qatar where he met with the two Afghan parties as they move into the next phase of negotiations following the successful conclusion of an agreement on rules and procedures. “It is imperative the parties build on the current momentum and accelerate their work to reach agreement on a political roadmap and a comprehensive and permanent ceasefire”. The U.S. Department of State affirmed, few days before the meetings.

U.S. Special Representative for Afghanistan Reconciliation Ambassador Zalmay Khalilzad @US4AfghanPeace visited Ankara from Dec 3-4. For the full statement on the visit to Turkey, click on the link: https://t.co/3sFAd1Gyhh

Today the U.S. Embassy in Turkey published a new statement following the visit of Ambassador Khalilzad and his voyage in the region to garner support for Afghanistan Peace Negotiations. According to the Embassy statement, in meetings with Deputy Foreign Minister Sedat Önal, Presidency Special Advisor Ibrahim Kalin, and other senior Turkish officials, Ambassador Khalilzad discussed U.S.-Turkey cooperation on efforts to advance Afghanistan Peace Negotiations.

Khalilzad and Turkish officials discussed the best way to build on the momentum that the recent breakthrough in talks between the Islamic Republic and Taliban negotiating teams offers. The U.S. envoy expressed appreciation for Turkey’s interest in helping accelerate the political process. The two parties also analysed the possibilities to garner broader international support for the negotiating teams as they attempt to define the terms of a political settlement and permanent and comprehensive ceasefire.

The Taliban have never cut ties with Al Qaeda: not only do they continue to cultivate operational links with the network founded by Osama bin Laden, but they also consult with the organization during the Doha negotiations that should lead to a stabilized and in peace. The idea, reported by the Afghan press in recent months, is today relaunched by the Washington Post, which has gathered information from observers and delegates from the United Nations. A confirmation attributed to Abdul Salam Hanafi, a former governor installed by the fundamentalists who left the group in 2001, according to whom “Al Qaeda has prepared the Taliban for talks.”

The connection between the fundamentalists and Al Qaeda is certainly not a surprise. But it is a new obstacle to the peace process, given that the Taliban have pledged not to allow Afghanistan to become the starting point for terrorist attacks in other countries. The historical ties between the followers of Mullah Omar and Mullah Akhundzada cannot be erased easily. Some sources from the fundamentalist organization suggest that Al Qaeda fighters could remain guests on Afghan soil, but without conducting attacks from there. All these groups, in any case, have links with Turkey and Qatar, as they have links and support from the Muslim Brotherhood. That explains the real reasons behind the Ambassador’s visit to the two countries.

According to the American daily, the Qaedist presence in Afghanistan is limited to 400-600 men. The Taliban are between 55,000 and 85,000: this puts any possible relationship into perspective. But at the same time, it is easy to see that Al Qaeda does not renounce a presence in the country which once hosted and defended Osama bin Laden and which will remain a “friend” in the future as well. And this is even more true in the face of attempts by Isis-Khorasan, the Afghan section of the terrorist organization, which has repeatedly attacked the Taliban to contest the hegemony of violent jihad.

However, diplomatic sources note that among the ranks of Al-Qaeda there are hardly any “advisers” able to enter into the technical merits of the constitutional suggestions, and therefore to influence the negotiations in legal detail. It must be said that the fundamental link between the network and the Afghan group passes through the Haqqani network, a Taliban formation initially more violent and not aligned under the “shura” of Quetta, or linked to a chain of command other than that founded by Mullah Omar. In any case, Turkey, Pakistan, and Qatar have a clear influence on the conduct of the negotiations. And some optimism raises the idea that Islamabad has finally come to desire a “stable” Afghanistan more than a succubus.