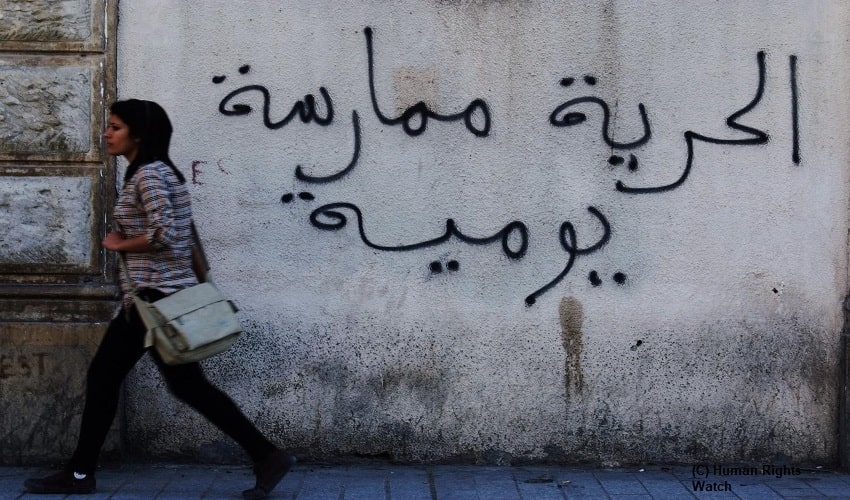 The Tunisian blogger Wajdi Mahouechi has been sentenced to two years in prison for posting a Facebook video deemed offensive by a Tunis court last week. Several human rights organizations, both locally and internationally, condemned the Tunis court decision, describing it as a clear limitation of freedom of expression.

Human Rights Watch reported on November 24 that Mahouechi, 31, as a frequent commentator on issues of public interest, posted a video early November on his Facebook page denouncing a Tunis public prosecutor’s failure to arrest and open an investigation against a local imam linked to the Muslim Brotherhood, who was justifying the assassination of people offending the Prophet Muhammad for Muslims. Prosecutors rather charged Mahouechi with “accusing officials of crimes without providing proof,” “offending others via telecommunications networks,” “public calumny,” and “insulting an officer on duty.” The charges stem from the penal code as well as Tunisia’s 2001 telecommunications code, HRW reported.

In #Tunisia, #EmnaChargui, a 27-year old female blogger, may be jailed for three years for "insulting the Qur'an" – although the Qur'an itself decrees no such earthly punishment for any blasphemer.

She should be left alone.https://t.co/nXiPgFB3JY

“Tunisia’s legal codes are rife with vague laws that the authorities use to penalize free speech and silence critical voices,” Eric Goldstein, acting Middle East and North Africa director at Human Rights Watch affirmed, adding that Tunisia recognizes itself for encouraging free speech since its 2011 uprising, but is retreating on preserving that liberty. The imam’s video after the October 16, 2020 beheading of Samuel Paty, a teacher in Paris, by a Chechen exile after Paty displayed cartoons of the Prophet Muhammad to his students during a lesson on right of expression.

In his Facebook post, Mahouechi criticized the prosecutor for not examining a 2019 accusation that he had filed against police who allegedly had beaten him. Mahouechi used speech that might be viewed as vulgar but said he was mocking only this authority and not the whole judicial apparatus of Tunisia. Sheriffs from the Hay El Khadra Unit for Combatting Terrorism and Organized Crime caught Mahouechi on November 2 and questioned him for at least four hours in the presence of his attorney, Mohamed Ali Bouchiba. The lawyer is the co-founder of Bloggers Without Borders, a body constituted by volunteer lawyers to aid social media activists and others prosecuted for their ideas and scripts.

Bouchiba told HRW that police officers had come to the Mahouechi’s family house late at night watching for him. “We knew he would be arrested,” stated Bouchiba, adding that the police caught him just one day after his post on the social network. Bouchiba affirmed that Mahouechi told authorities that he was not accusing anyone in his video and only reacted as a whistleblower to the imam’s video for the single objective of exposing radical beliefs and terrorism.

The Tunis First Instance Court condemned Mahouehchi of “accusing public officials of crimes related to their jobs without furnishing proof,” culpable by up to two years in jail under article 128 of the Tunisian penal code, harming or disturbing others via public telecommunications networks under Art. 86 of the telecommunications code, which stipulates a sentence of up to two years in prison and a fine up to 1,000 Tunisian dinars (around US$300). Public calumny, under article 245 of penal code; and “insulting a public officer during the performance of their duties,” punishable by up to one year in prison under Article 125.

According to HRW and Bloggers Without Borders Tunisia is seeing an increase in prosecutions that remind of the arrests and trials of writers and activists in 2017. “The prosecutions never stopped really. They just slowed down and now they’re back.” The lawyer said speaking with HRW.  Two reports issued by the international organization, in January and October 2019, revealed the prosecutions of bloggers and social media activists in Tunisia for their peaceful online commentary. In these pursuits, authorities made application of laws on criminal defamation, “spreading false information,” and “harm of others through telecommunications networks” to sue people who post on social media about politics, expose corruption, or criticize authorities and decision-makers.

Since 2017, Tunisian yards have condemned six social media operators to prison for sharing their critical views. The two-year punishment against Mahouechi is the hardest so far toward a blogger for online criticism. Mahouechi is completing his penalty in Tunis’s Mornaguia prison. His lawyers will contest the judgment. “Tunisia has no excuse to prosecute peaceful critics and intimidate bloggers who attack state authorities,” Goldstein said. “Parliament should move quickly to amend or delete laws that are relics of the ousted autocratic regime.”