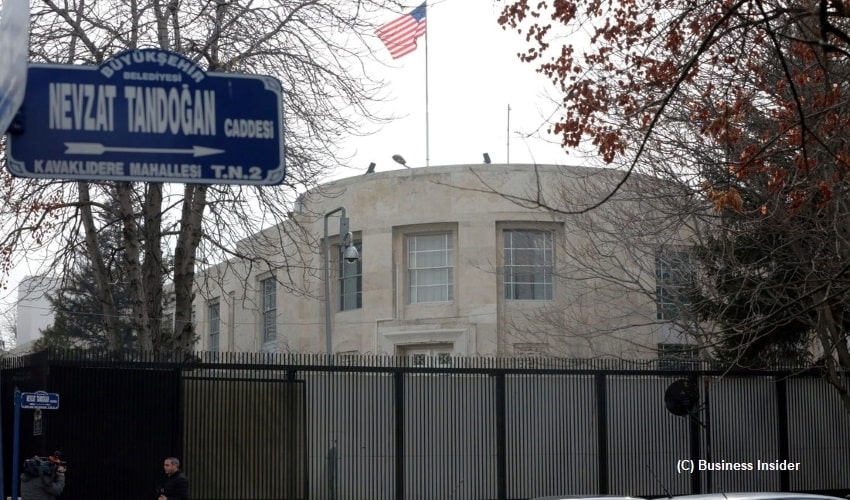 The embassy advised U.S. citizens to exercise heightened caution in locations where Americans or foreigners may gather, including large office buildings or shopping malls.

The US embassy in Turkey warned on Friday of the possibility of terrorist acts and kidnappings of US citizens in the country, noting the temporary suspension of visa services. In a security alert the U.S. Mission in Turkey said it has received credible reports of potential terrorist attacks and kidnappings against U.S. citizens and foreign nationals in Istanbul, including against the U.S. Consulate General, as well as potentially other locations in Turkey.

The embassy advised U.S. citizens to exercise heightened caution in locations where Americans or foreigners may gather, including large office buildings or shopping malls. The security note indicated that all American Citizen and visa services at U.S. Mission in Turkey’s facilities, including U.S. Embassy-Ankara, U.S. Consulate General-Istanbul, U.S. Consulate-Adana, and the U.S. Consular Agency-Izmir, will be temporarily suspended.

BREAKING: Americans, Armenians, and Greeks are being targeted in Istanbul & Ankara this week

Fox News reported this now, BUT my Turkish sources in the human rights NGOs are reporting to me that the government is actively arresting opposition toohttps://t.co/VC3E5inhGg

The note affirmed that individuals with scheduled appointments will be notified by email with instructions on how to reschedule their appointments. The embassy suggested to American and foreign citizens in Turkey to exercise caution and remain vigilant, avoid crowds, keep a low profile. American citizen actually in Turkey are invited to be aware of their surroundings, stay alert in locations frequented by foreigners, and monitor accredited local media for updates.

According to several sources, Americans, Armenians, and Greeks are being targeted in Istanbul and Ankara by radical islamists linked to the Muslim Brotherhood, the terrorist movement acting under the political umbrella of Recep Tayyip Erdogan. The Turkish Government is still engaged in repression campaign against the opposition, arresting dozens of journalists and activists who criticize Erdogan’s wrong choices in domestic politics and on the international stage.