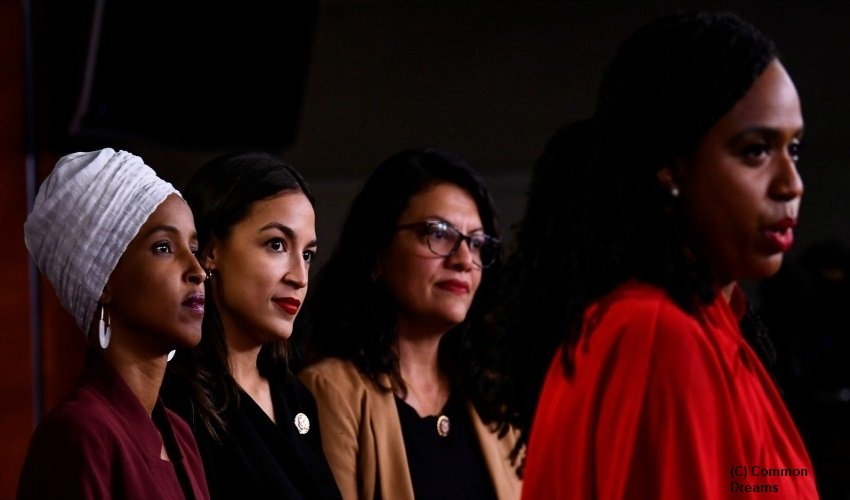 The Squad (Alexandria Ocasio-Cortez, Ilhan Omar, Ayanna Pressley, and Rashida Tlaib) and some group of House Democrats requested the United Nations to help investigations into the human rights abuse by the US Homeland Security Department.

In a five-page letter, The Squad (Alexandria Ocasio-Cortez, Ilhan Omar, Ayanna Pressley, and Rashida Tlaib) and some group of House Democrats requested the United Nations to help investigations into the human rights abuse by the US Homeland Security Department.

The letter requested associations and people affiliated with the U.N., including the U.N. High Commissioner for Human Rights Michelle Bachelet, to start an investigation concerning the allegations that various ladies kept at an Immigration and Customs Enforcement center in Georgia, were unnecessarily forced to go through various medical procedures, including hysterectomy.

The progressive lawmaker’s letter came following the House passed a decision recently to officially denounce the allegations of forced clinical procedures on the migrant ladies in detention centers.

These allegations clearly show a pattern of human rights violations by the DHS. This conduct is perpetuated and stimulated by the steady and indefensible failures of the United States administration and to pay attention to these allegations by transparently investigate the matter in an unprejudiced manner, the letter stated.

When a nurse at the Irwin County Detention Center in Ocilla, Ga., complained and detailed about shocking clinical negligence that hysterectomies in high rate are being conducted on migrant women.” DHS had begun a probe concerning the complaint last month.

As per The New York Times, Wendy Dowe, the 48-year-old immigrant from Jamaica, who was living in the U.S. without legal status, was picked up by the immigration officers.

The Squad and other Democrats ask UN to investigate alleged human rights abuses by DHS https://t.co/aZZcQp6yXk

A gynecologist who used to examine migrant women in the detention center revealed to Wendy that her menstrual cramps were due to a large cyst and fibroids that urgently needed to be removed, yet Wendy was doubtful.

The gynecologist had pressured her to consent and go through the procedure. Only when Wendy was deported to Jamaica, she discovered that there was no need for any procedure. When other doctors examined her clinical records, saw that the cyst was very small.

On Thursday, The Los Angeles Times also revealed that around 19 women at the Georgia confinement facility alleged that medical professionals pressurized them to go through medically irrelevant or extremely aggressive medical procedures without their consent.

According to the report, all the ladies were given birth control and forced to go through an operation without them agreeing to eliminate reproductive organs, for example, the uterus, fallopian tube, and ovaries.

Moreover, the Squad and a group of democrats pledged in the letter to do all that they can to investigate all charges of human rights abuse locally, the variety of rights and complaints mentioned, and the seriousness of the allegations require an international inquiry.