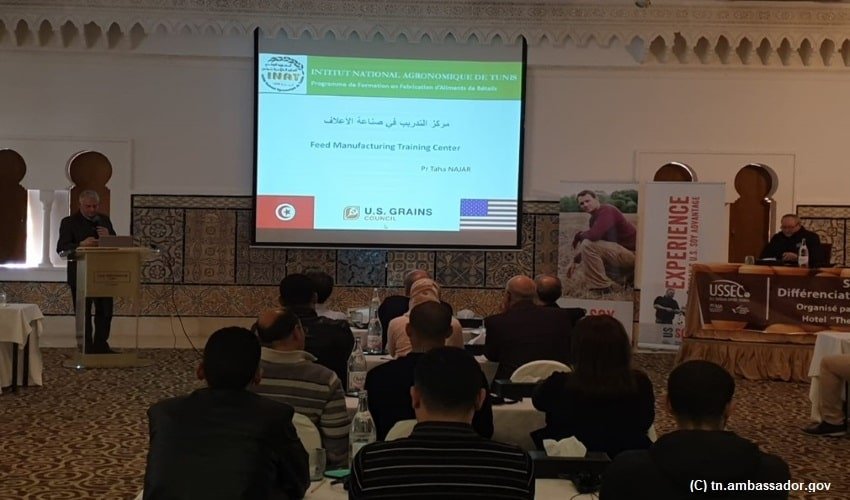 The Embassy of United States in Tunisia announced yesterday the successful completion of the “Tunisian Training Center for Feed Manufacturing” during a meeting between the U.S. Ambassador to Tunisia, Donald Blome, the Minister of Agriculture, Water Resources and Fisheries, Akissa Bahri, joined members of the Tunisian National Institute for Agronomy (INAT) and the U.S. Grains Council (USGC) in Tunis. The USGC-INAT Training Center is working to improve feed manufacturing across Tunisia and serves as a regional hub for feed manufacturing training in Africa and the Middle East, the Embassy said in a press release.

According to which, the USGC-INAT project focused on training nutritionists, feed millers, and producers of poultry, dairy, beef, and aquaculture through programs that improved overall feed manufacturing.  More than 200 Tunisian students and professionals have already received training in both Tunisia and in the United States on improving livestock feed production and utilizing more modern and efficient techniques.  The training center will also serve as a model training facility for modernizing the feed and livestock industry throughout Tunisia, the U.S. embassy added.

The Tunisian Training Center for Feed Manufacturing project is just one example of the United States ongoing partnership with the Ministry of Agriculture in support of Tunisia’s economic development, by fostering innovation and creating jobs in the agriculture sector. Modernizing and streamlining the agricultural sector will play a key role in jumpstarting Tunisia’s economy by increasing the number and range of high-quality Tunisian agricultural products in the marketplace.

For her part, Ms. Akissa Bahri, Minister of Agriculture, Water Resources and Fisheries, stated  during the event that the Regional Training Center for Feed Manufacturing established at the National Institute for Agronomy in Tunis is a significant achievement adding new bricks to the edifice of joint relations bringing the Tunisian and the American peoples together, and reflects the strength of the bilateral relationship and the peoples’ ambition for more joint work to advance the interests of the two brotherly countries.  The Minister of Agriculture added that choosing the oldest higher education institution in Africa and the Arab world, namely the Tunis National Institute of Agronomy (122 years old), to found this center is a symbol of the importance and significance of this project.

Ms. Akissa Bahri explained that the Regional Training Center for Feed Manufacturing seeks to contribute to the development of the animal feed sector in Tunisia by providing high-level training for technicians, engineers and veterinarians working in the feed industry and in livestock production, thereby raising productivity, advancing quality of animal products, and benefiting livestock farmers.

Mr. Donald Bloom, the US ambassador to Tunisia, and Mrs. Akissa Bahri, Minister of Agriculture, Water Resources and Fishing, chaired jointly a working session to discuss ways for developing cooperation between the two countries, in the future.

The agriculture sector represents a major pillar of the Tunisian economy, with approximately 17% of the country’s workforce engaged in the sector, and with agriculture production contributing about 10% to Tunisia’s GDP.  Given the impact of the sector and the potential for growth, the U.S. government, through the Embassy’s Assistance Unit, has dedicated close to $12 million USD to support three projects targeting Tunisia’s agribusiness sector, including the USGC-INAT “Tunisian Training Center for Feed Manufacturing” project.