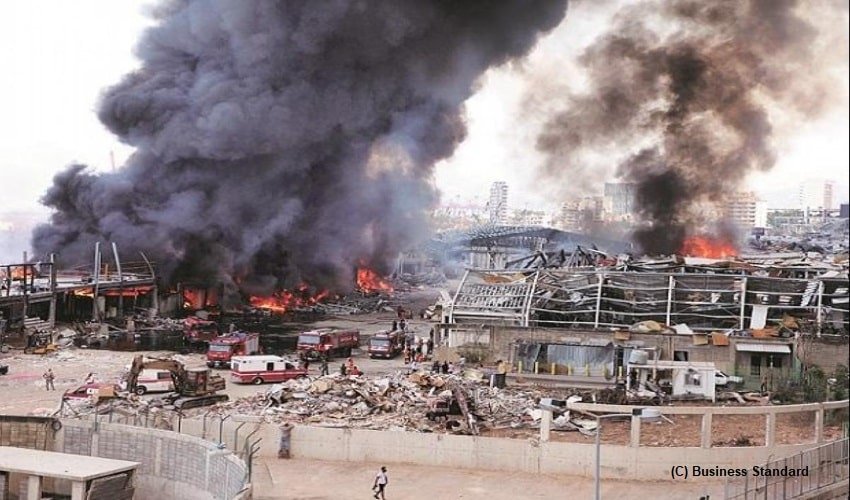 Lebanon’s dense diplomatic and highly corrupt web of politicians seemed to be impeding the investigations, making it hard to put out an impartial and credible report.

On Thursday, Human Rights Watch urged United Nations to step into the Lebanon blast investigations as the country’s domestic team has failed to yield any substantial results. It’s been more than two months since the country was ravaged by the deadliest blast in its history on August 4, when over 2,700 tons of ammonium nitrate, lying at the city’s commercial port, caught fire. The massive explosion reduced the city down to rubble and took over 170 lives, injured about 6000 and left over 3,00,000 homeless.

Lebanon’s dense diplomatic and highly corrupt web of politicians seemed to be impeding the investigations, making it hard to put out an impartial and credible report. The New York-based rights group proposed the International Support Group for Lebanon, meeting next week, to urge Lebanese authorities to make way for United Nations, HRW strongly believed that an independent inquiry to determine the causes of and responsibility for the explosion, can only bring out a transparent and just report.

Everyone in Beirut has had their life turned upside down by the catastrophic explosion that devastated half the city, and they deserve justice for the disaster inflicted on them. Only an independent, international investigation will uncover the truth about the blast. The International Support Group for Lebanon should not play along with the Lebanese authorities’ pretense that they are able to conduct their own credible investigation.

Many international rights groups along with people of Lebanon joined HRW in raising the call for an independent and international investigation to dig in the mess to find out the underlying truth. On Sunday, a nine-member team of FBI investigators landed in Beirut.

A year after Hariri stepped down in the face of mass protests, he’s once again been tapped as #Lebanon‘s PM. Fitting that @HRW finds today that political interference has made a credible domestic investigation into the Beirut Blast impossible. https://t.co/d7Xwehzk7J

In the name of international help, a nine-member team of FBI investigators and 50 French forensic police officers and gendarmes have been helping the nation. Unfortunately, Lebanese authorities did not provide clear mandate for their role and liberty to  their ability to speak publicly about their findings. Besides, the country’s President Michel Aoun said that any other international investigation would be a “waste of time.”

On October 13, Lebanese local media reported that with respect to the blast, authorities arrested 25 people and 30 had been charged. But interestingly none of the ministers or officials was among those detained despite knowing that heavy explosive was lying in the port’s warehouses. “The Lebanese authorities’ failings over the past two months have shown that an international investigation is the only avenue for the people of Lebanon to get the answers and the justice that they deserve for the Beirut explosion,” Majzoub said. “But it has also underscored the importance and urgency of addressing the structural weaknesses preventing Lebanon’s judiciary from independently and impartially delivering justice.”