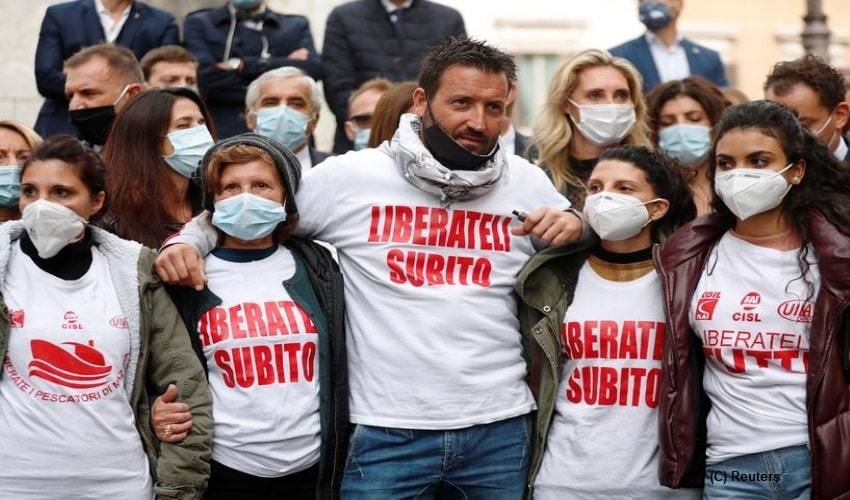 The 18 fishermen were on board of two fishing boats that left Mazara del Vallo, Sicily. Today they are in barrack just outside Benghazi, in eastern Libya for almost two months, after the Libyan authorities stopped them while they were in territorial waters. Libyans without permissions.

“Our seafarers are well; they are regularly followed by a doctor. The medicines have always been delivered. There is no health problem or of any other kind. They are in a situation that is not of promiscuity with other detainees,” the Italian ambassador in Tripoli, Giuseppe Buccino Grimaldi, said speaking of the seafarers of the two fishing boats seized in Libya fifty days ago.

The 18 fishermen were on board of two fishing boats that left Mazara del Vallo, Sicily. Today they are in barrack just outside Benghazi, in eastern Libya for almost two months, after the Libyan authorities stopped them while they were in territorial waters. Libyans without permissions. Italian fishermen are awaiting trial. In addition to the accusation of having violated the laws of the sea, there is also that of drug trafficking. In fact, on board the two fishing boats, where eight Tunisians were also traveling, the eastern Libyan authorities would have found a large quantity of Hashish.

On September 1st, the fishing boats “Medinea” and “Antarctica” and their crews – eight Italians, six Tunisians, two Filipinos, and two Senegalese – were stopped about forty miles off the coast of Libya. The Libyan authorities contested its presence within a portion of the sea that Libya has unilaterally claimed since 2005 as its exclusive economic zone, that is, the strip of sea in which a country has the exclusive right to the economic exploitation of marine resources. From that moment, apart from a telephone call on September 16, there had been no more news of the fishermen. Family members were only told that they were in good health. Yesterday, the relatives of Sicilian fishermen were received in the Vatican by Pope Francis who asked for their release.

Their arrest has brought to public attention the story of four Libyan footballers arrested at the Syracuse prison for human trafficking. It would be a judicial error. The sentence is based on the testimony of some African migrants, who accused the Libyans of the death of 49 immigrants during a sea crossing from Libya in 2015. The captain of the boat, however, is Tunisian. The authorities of eastern and western Libya have both asked the Italian authorities for their release in exchange for the fishermen detained in Benghazi. The Italian Foreign Minister Luigi Di Maio described this request as an unacceptable blackmail.