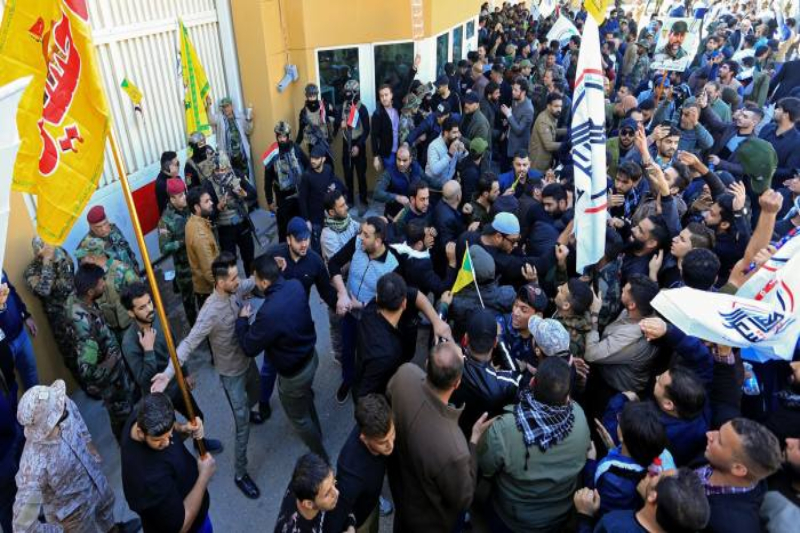 us embassy in baghdad

As a sign of protest, militia groups tend to destroy structures built by their enemies that are known to have cost a fortune to make. The US embassy was no different. The American government was well-aware that there are risks of opening an embassy in Baghdad but regardless of that it went on to open a huge embassy in the capital of Iraq.

But last year, when people were happily celebrating New Year, an attack took place on the US embassy which as per reports caused damage worth $35 million. One Of the government agencies of the US noted that in any case, fire damages are huge and this time was no different, especially given the scale of the blast.

However, the language was later on changed by the spokesperson of the State Department who used the term ‘hostile militia’ to address the incident. In response to the US airstrikes on December 29, the militia attacked the embassy on New Year’s eve and continued till the next day.

The former secretary of state Mike Pompeo did not hold himself back from calling the people who attacked the building terrorists. While on Fox News, the top US diplomat said, “What you saw was Iranian-backed terrorists … come into the American embassy and pose a risk to American diplomats and personnel inside the embassy.”

The US had not only airstrikes in Iraq but also Syria and as per a source, the militia groups were threatened after the US specifically chose to airstrike their areas. These were the areas used by Iran-backed militia Kataeb Hezbollah. The American government considers Hezebollah to be global terrorists after the extremist group attacked many housing centres where Americans stayed.

The US had also blamed the grup for carrying out dozens of rocket attacks on its citizens which also includes an Iraqui American contractor, who was killed in Kirkuk days after Christmas. The Baghdad embassy was high on security given the tense climate between Iraq-Iran and America. Despite such huge structures and tight security, the militia group managed to penetrate by destroying the gates of the building. This destruction had cost $20 millions to the American government however, the people at the site said that every penny spent on the structure was well spent as the as the militia’s attempted to completely destroy the structure, it gave people inside to quickly get away.