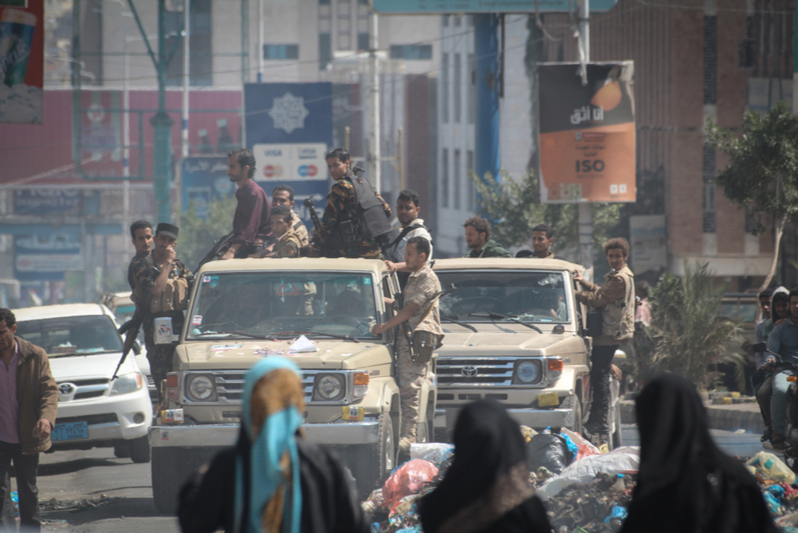 The height of Houthis’s crime against women can be gauged from the recent abduction of Yemeni model and actress, Entesar Al-Hammadi. Al-Hammadi, along with her two friends got kidnapped from Sanaa by the Iran-backed militant group. Many observers believed that she was targeted specially for her bold and liberal outlook and choice of profession.

Al-Hammadi had been very vocal about her love for modelling and expressed her desire to be part of international catwalks. She once said, “It would be great if I was given an opportunity outside Yemen.” In a television interview given last year, she said, “My parents told me my dream of becoming a model was pie in the sky. I said that it was my dream and I would keep pursuing it.”

Al-Hammadi rose to fame with her pictures posted on social media platform as she graduated from initially posting pictures of herself in Yemeni traditional outfit, with Hijab to ones without Hijab. He comments drew attention of the conservative Houthis, as she said. “I did not care about anything, since I love this profession.” A fearless bold woman who speaks her mind and makes her own choices was seen as a huge threat by the terrorist group. Al-Hammadi’s kidnapping raised alarm in the Yemen society, questioning to what extent Al-Houthis can go to suppress women. The group is known for openly denunciating women and calling them down as mere slaves.

Many Yemeni activities and human rights propagators have raised concerns over the plight of women in the country, their rampant kidnapping and sexual assault by the rebel group. It is not the first time the Iran-backed extremist group has been slammed for its mistreatment of women and exhibiting intolerance towards them.

“Today’s UN Security Council Resolution 2564 (2021) sanctioning Sultan Zabin clearly demonstrates that the international community will not tolerate the atrocious use of torture and sexual violence in conflict zones,” Lord Ahmad of Wimbledon, the UK’s Special Representative on Preventing Sexual Violence in Conflict and Minister of State for South Asia and the Commonwealth, said in a statement.

“It is just and right that Zabin is sanctioned for leading the Criminal Investigation Department’s (CID) heinous campaign of systematic arrest, detention, torture, sexual violence and rape against politically active women in Yemen,” Ahmad added.

Security Council in its resolution said that Zabin “engaged in acts that threaten the peace, security and stability of Yemen, including violations of applicable international humanitarian law and human rights abuses.” It added that he played a key “role in a policy of intimidation and use of systematic arrest, detention, torture, sexual violence and rape against politically active women”.

Besides, in February, three Yemen-based rights groups, published a joint report highlighting 1,181 violations by the rebel group against women. It included murder, torture, abducting and sexual violence. The report documented crime committed by the Houthi militias against women in Yemenfrom 2017-2020.

Nasma Muhammad, one of the detainees, who was kidnapped on March 24, 2019, by Zainabiyat — a women’s military group established by Houthis, said that she was “tortured, beaten, electrocuted, sexually harassed and raped” by the extremist group. She said that she was detained on the charges of “providing coordinates to the Arab coalition” and was accused of being “an agent of America and Israel and working in a prostitution network”.

Wesam Basindowah, director of the 8th March Yemeni Union Women, who also co-authored the report, said, “Violations of women’s rights in Yemen, especially the rights of female prisoners in Houthi-controlled prisons is unspeakable. There are shocking facts about the sufferings of detainees.”