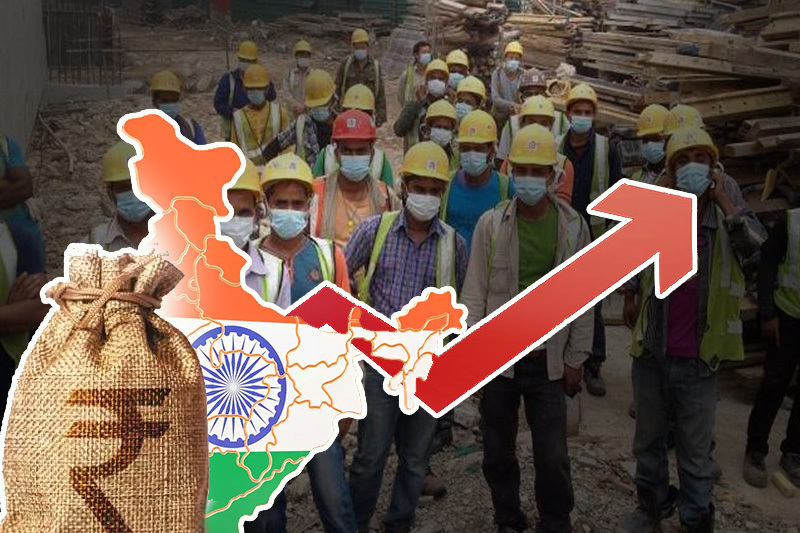 revive the economy through migrant workers

India- A pay or allowance cut makes the situation worse. When it affects purchasing power, the economy responds by contracting. The issue has been building, and the Center might have postponed payment or, as in the past, deposited it to provident fund instead of conveying a somber message to government employees.

For 48 lakh federal employees and 1.6 lakh crore state employees, the actual deferment as a result of the DA freeze would be 38,000 crore and 82,000 crore, respectively. All upcoming payments, calculations, and retirement benefits would be affected because it is not a postponed payment. There will be a significant economic loss.

As the company affects between 10 and 40 crore people through salary reductions or workforce reductions, it signifies shrinkage. Actually, if the DA is paid, the government will receive back roughly ‘40,000 crore in income tax and at least ‘25,000 crore in indirect taxes.

At least five crore people have already lost their jobs due to the unorganized sector, which has caused the biggest outflow of migrant labor since the 1947 partition. MGNREGS are under stress.

A catastrophic decline is about to start. According to a Wills Towers Watson study, 5% of businesses expect a turnaround in the next 12 to 24 months. The optimistic 57 percent predict that the corona lockdown will have a moderate to significant negative impact on business over the next six months. Organizations anticipate that the depressing period will pass in 12 months in 46% of cases, while in 21% of cases, it will linger for two years.

Economic surveys show that the top 50 corporations were the biggest defaulters, which caused the banking system to fail and produce enormous NPAs starting in 2008–2009. Actually, the big organizations don’t need any help right now.

It is a pipe dream for the government to believe that these will generate jobs. They didn’t do it in 2008-2009, and they’re not likely to do it now either. The elderly and savers would be affected by the interest rate drop. The economy was seriously harmed by the unexpected closure. Since the 2016 note-ban blow, it is essentially the second significant blow. Due to the lockdown’s lasting consequences and the $20 billion ($23 billion) decrease in NRI remittances, the total loss may be higher than initially thought.

The difficulty is in regaining the trust of migrant workers. A stronger rural and agricultural economy is required. After the corona, a new model is required. India must be sustained by its villages, and the RSS addressed a decentralized cash economy in April 2015 when it revived village clusters (gram sankulyojana).

The human capital must be respected by the system. They are those who create an economy. They work for a living and support themselves through spending. The true cost to honor the dignity of labor and provide a sustainable means of subsistence must be provided in place of their wage suppression and harassment.

The common man and his freedom of mobility must be the focus of the economic restoration strategy. A must is to cut back on and eliminate useless expenses like highway tolls, quick tags, many cess, fees, and unreasonable charges, as well as GST.

Banks must honor the savings of the underprivileged by paying higher interest rates. It would support the banking industry’s efforts to increase cash on hand.