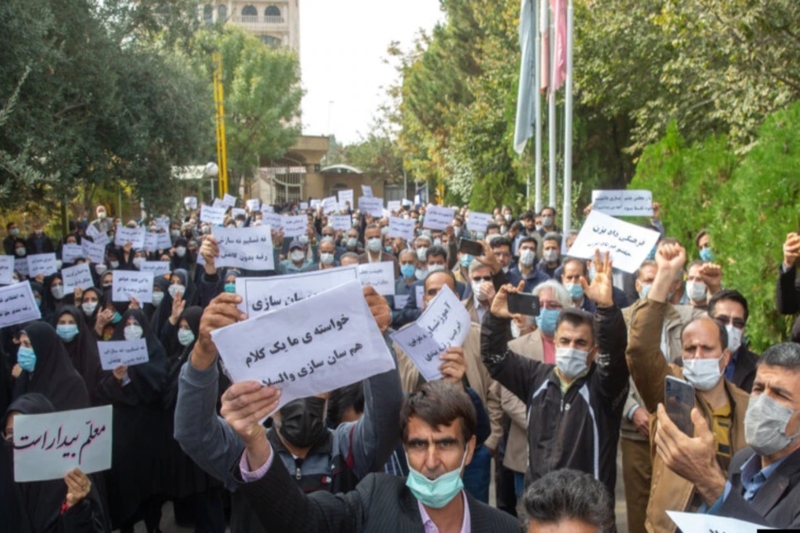 Iran – Teachers in Iran have decided that they will not take it anymore as they prepare to go on strike if there demands are not finally met. Thousands of teachers have been protesting in various ways to be heard.

This week, they have threatened of an ‘uprising’ if higher pay was not offered by President Ebrahim Raisi and Parliament Speaker Mohammad-Bagher Ghalibaf. They are also looking at pension reform. Around 50 cities could be heard chanting the slogan ‘Raisi, Ghalibaf, this is the last call. Teachers’ movement is prepared for an uprising.’

The same slogan appeared on banners and posters in all rallies, including Tehran where teachers protested in front of the parliament. In December, the reform was chaired to the parliament within the budget bill. It proposed a 14 percent increase in the educational ministry’s budget. It however did not earmark resources for teachers’ pension or pay hike.

Last week, the parliament finally also said that the new system, which has taken about a decade to pass, will be put in place at the start of the country’s new year, which begins on March 21.

However, teachers have still taken to streets to be heard. This marks the total uproar amongst government employees in the public sector who have been suffering under burden of inflation and low pays for decades together.

This was the fifth nationwide protest by teachers in the past two months as they demand implementation of decade-old legislation that would bring the salaries and pensions of 750,000 teachers in line with other civil servants.  Teachers’ demands also include pensions to be aligned with those of other public sector employees. They called for the release of colleagues detained in earlier protests, including activist leaders, and chanted “The jailed teachers should be freed” and “From Tehran to Khorasan, teachers are in prison”. Protesters said 15 teachers were arrested during clashes with security forces across the country. Even civil servants in one of Iran’s most powerful sectors, the judiciary, held rare demonstrations in January as they called for their pay to be increased.