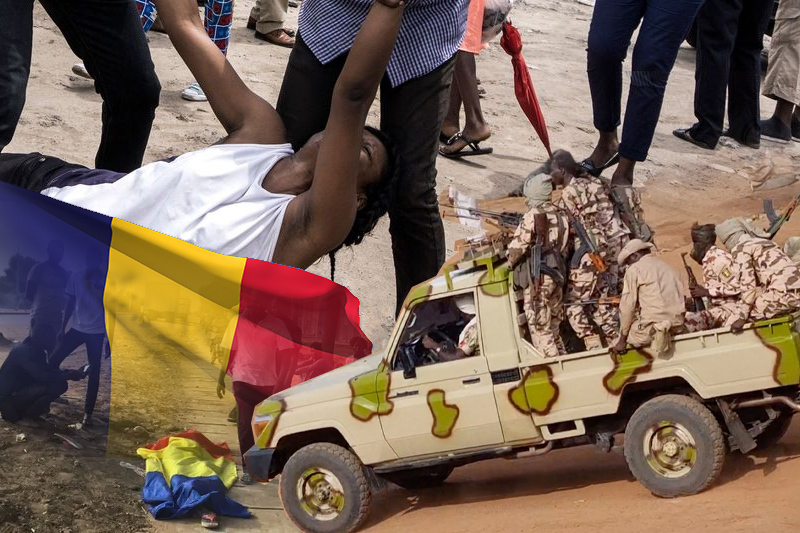 Chad – According to the country’s prime minister, security forces in the capital of Chad, N’Djamena, have forcibly dispersed rallies demanding for a quicker transition to democratic governance, resulting in at least 50 deaths and scores of injuries.

Some districts of N’Djamena were shrouded in black smoke, and teargas grenades could be heard exploding for the majority of the day. Several highways were blocked with barricades and burning tires, and the majority of stores were shuttered to prevent looting.

At a news conference, the prime minister, Saleh Kebzabo, provided the dead toll and said that the security forces were acting in self-defense.

“What occurred today was an armed popular uprising to seize power by force, and those responsible for this violence will be held accountable,” said Kebzabo, the National Union for Democracy and Renewal (UNDR) party president who was appointed prime minister last week after his predecessor resigned to pave the way for a new administration. Demonstrators with firearms are believed to be rebels.

Kebzabo later informed the Guardian via telephone that he had ordered the main opposition group Transformers and a coalition of opposition parties and civil society organizations called Wakit Tama to cease activity, stating that Transformers “launched a rebellion in the south and began killing people.”

The death toll has been estimated by opposition parties to be about fifty, although these estimates have not been independently validated.

Previously, a government spokeswoman stated that ten police officers were among the deceased. Vice-president of the UNDR Celestin Topona informed reporters that protestors attacked and set fire to the UNDR party offices.

Since Idriss Déby’s untimely death in April 2021 while visiting troops fighting insurgents, Chad has been on edge. There is opposition to a transitional military council led by Déby’s son, Mahamat Idriss Déby, which seized control in the vast central African nation after the president’s death and delayed elections until October 2024.

Critics are urging a quicker restoration to democracy and a change in administration after three decades of dictatorship by Déby over the poor desert nation.

Thursday’s demonstration in N’Djamena was held in contravention of a government ban to commemorate the date when the military had initially promised to hand over authority. A local journalist was shot and later died as a result of his wounds. The Chadian Red Cross reported that it had dispatched ten teams to administer first aid and transported “dozens” of injured individuals to hospitals.

The leader of the Transformers party, Succès Masra, reported from the capital that the dead toll was significant. “I urge the international community to safeguard the Chadian people,” Masra, who claimed to be in hiding, stated. My crew has been counting the number of protestors slain today; some are in the south and many are in the capital.

One protestor stated that he witnessed thirty individuals being shot and killed. “Today, we walked to the streets to demonstrate peacefully, but uniformed armed forces opened fire on us. I counted thirty injured persons, some of whom are already dead… They lost a great deal of blood,” the protester, who did not wish to be identified, claimed.

Protests also occurred in Moundou, located in the south.

Enrica Picco, director for Central Africa at the International Crisis Group, stated, “We see the military junta in Chad clinging to power quite closely. Civil society and the opposition currently lack the ability to oust them from power. There will be an increase in repression, which could eventually lead to destabilization.”

The turbulence in Chad, according to experts, exemplifies the severe political challenges confronting the fragile Sahel region, which has witnessed a string of coups d’état in important states in recent years as governments battle with escalating extremist violence and pervasive societal issues.

Several civil society and opposition-led protests against the military coup and France’s support for the transitional government have been violently suppressed by Chad’s security forces, occasionally resulting in fatalities. In May, police deployed teargas and water cannons to quell anti-French demonstrations that involved the destruction of shops with ties to France.

Since achieving independence from France in 1960, Chad has had a long history of coups and political unrest. During his long reign, the elder Déby fought off repeated efforts by rebels crossing from Libya and Sudan to depose him. In its war against jihadism in the Sahel, France viewed him as a dependable friend. France endorsed his son as his successor immediately.

However, France’s obvious discontent with Mahamat Idriss Déby’s efforts to consolidate power was evident during the 10 October inauguration ceremony, where France, like the European Union, was represented by merely an ambassador.