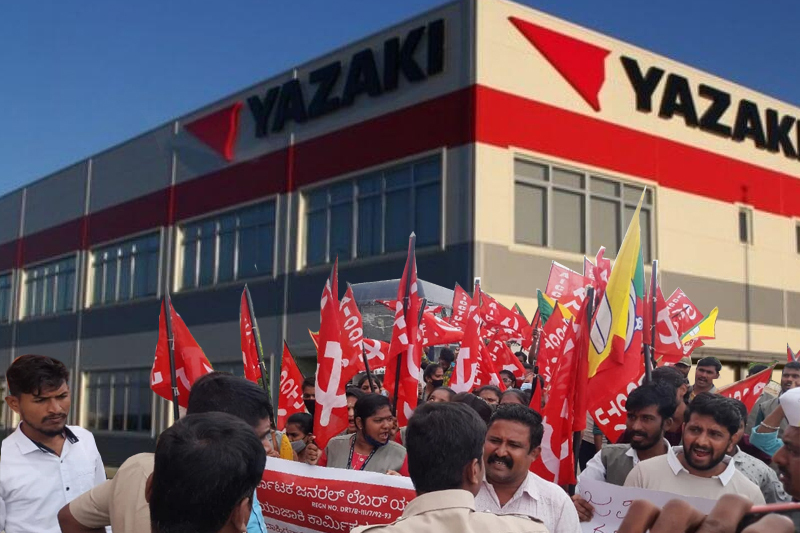 Employers of Yazaki Pvt. Ltd., which is located in Bengaluru’s rural district blamed the company. They said that in December the company had laid off around 150 employees, all these done by verbal mode only. The plant produces wire harnesses for Toyota and Maruti cars in this region.

Workers complained that they had not got any notice but biometric authorization was closed by the company. On December 13, 50 workers fired from their job, and just on the next day 14th, December 100 more workers were lost their job.

In the Lakkenahalli plant, there are around 2000 workers who are assisted by the All-India Central Council of Trade Unions and filled out a memorandum with DLC. They are educating workers about their rights and starting protests.

A worker who served the company for 5 years, he transferred from the Jigani plant to the Luckenahalli plant and got thrown out just by verbal saying. The management had not met them but the police were called for him. Laborers are saying that police had taken photographs and it is linked with the current cut-off. 60 of the sacked employees are women. They completed their training throw ITI, some have a diploma in electrical engineering.

HR at the Yazaki plant said that we dismissed laborers after arguing with them. We had recruited them under the Apprenticeship Act. , we trained them but it was clear that we can remove them anytime. Now some political connections came into it so the issue is flaming.

On the question of the termination notice, the HR head said that it was not required at all.

But workers believe that because of the management changes it all happened to them.