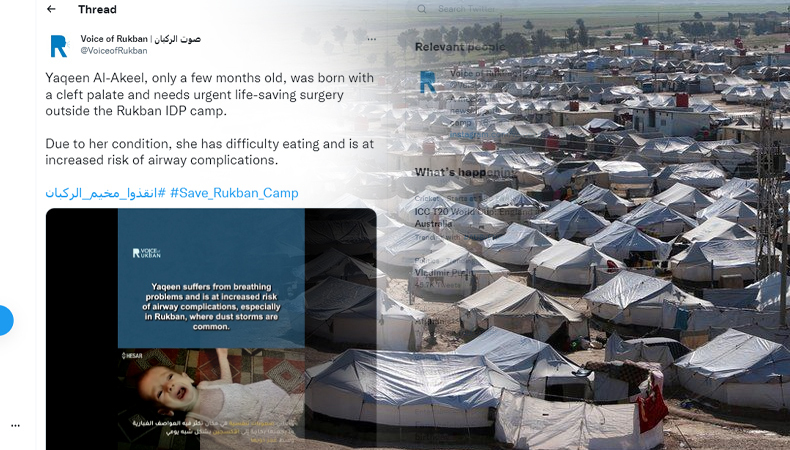 Syria – Parent’s pleas went unheard as a child could live to see the day and perished in a Syrian camp. It was near the US base and the Rukban camp has seen just another unfortunate death.

Parents of Yaqeen Al Akeel had fought for months for her get medical attention. The child was born with a cleft palate and was in need for an urgent life saving surgery. The child had survived for nine months before she succumbed to a medical condition in affecting her breathing.

The cleft lip had compromised her ability to breath and eat properly. The child perished this week left the parents in such grief that they have had to take to Rukban’s social media account to beg for help from the international community but nothing really happened.

The camp actually is located in the 50kilometer safe zone near the border with Iraq and Jordon. Human rights groups have blamed both Jordon and US for this callousness and painful loss of a life that could have been saved.

Access to humanitarian aid was first cut by the Jordanian government in 2016 and shifted to Damascus-based agencies under the UN umbrella. Aid to the camp, in other words, can only enter with the permission of the regime that has blockaded it.

In addition, Amman closed the camp’s closest health clinic, run by the UN in Jordanian territory, amid the Covid-19 pandemic and has never reopened it.

Children continue to be collateral damage to the whole situation in various Syrian camps.

Rukban’s followers on social media took to various platforms to mourn the infant’s death, among them activist Omar Alshogre, who also serves as SETF’s director of detainee affairs and is a survivor of Assad regime torture.