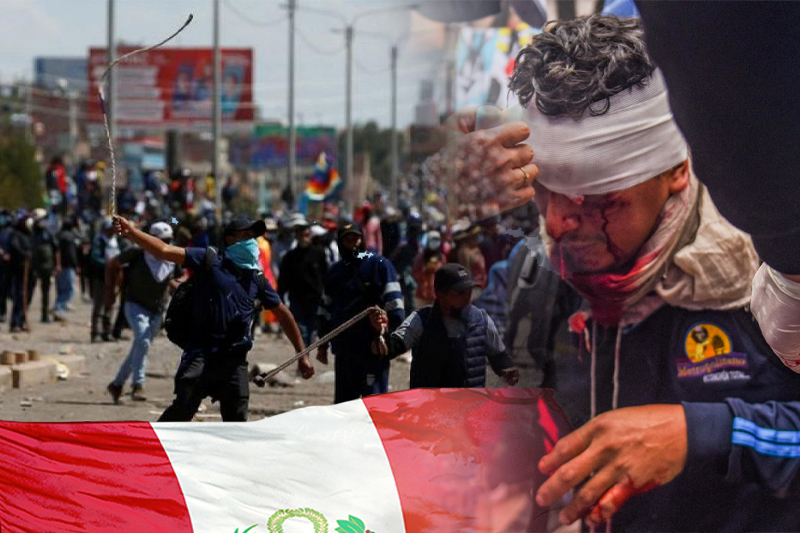 what is going on in peru and why are people protesting

Reuters reported that at least 40 people were killed in clashes between Peruvian security forces and demonstrators, the deadliest outbreak of violence in the Andean nation in over two decades. Protesters are demanding new elections and accountability from the administration.

Since early 2022, when a motion to impeach former president Pedro Castillo failed in the Peruvian parliament, the Andean nation has faced intermittent demonstrations. In December 2022, following Castillo’s removal and detention, the most violent demonstrations to yet occurred. The oppressive response to demonstrations by Castillo’s replacement, Dina Boluarte, has simply poured gasoline to the flames.

The Indian Express examines the situation in Peru in further detail.

On December 7, the Congress impeached then-President Pedro Castillo, who was arrested later that night on several corruption charges and for a failed “coup.” Earlier that day, the left-leaning leader’s final efforts to keep power failed when both his civilian and military allies deserted him in his bid to dissolve Congress and seize total control. Reuters reported that Castillo was sentenced to 18 months of pre-trial imprisonment on allegations of insurrection.

Dina Boluarte, his previous vice-president, replaced him. However, many Peruvians do not consider Boluarte to be a “legitimate” president. They prefer new elections that would let Peruvians pick their own leader. However, Boluarte has thus far refused to resign. While she promised to have elections in 2024 as opposed to 2026, many Peruvians desire immediate change.

According to Reuters, allegations of excessive force against protestors have increased animosity against Boluarte’s leadership. Since they began one month ago, protests have been increasingly violent. AP reports that according to official Peruvian data, 39 civilians were killed in skirmishes with police, while another 7 were killed in car accidents caused by roadblocks. Additionally, at least one police officer has perished. There have also been non-protester casualties.

Human rights groups have complained that the Boluarte administration used excessive and disproportionate force to quash the demonstrations. According to reports, the army shot live ammunition at demonstrating residents and sprayed smoke bombs on crowds from helicopters. “The increase of violence in Peru cannot be tolerated. State brutality against protestors and the loss of human life are compounding the situation, according to Amnesty International Peru’s executive director, Marina Navarro.

The Peruvian government proclaimed a national emergency on December 14, granting the military forces broad authority to operate and use force and suspending several fundamental rights, including the ability to assemble and move freely.

According to Reuters, on January 10 the office of Peru’s chief prosecutor initiated an investigation into Boluarte and members of her cabinet on allegations of “genocide, qualified homicide, and significant injury.”

On the other hand, according to the army, demonstrators also employed guns and improvised bombs. Nationwide, incidents of stone-throwing, vandalism, and arson have been recorded.

Reuters claimed that protesters blocked roads, set government and corporate buildings on fire, and attacked airports, resulting in tens of millions of dollars in damage and lost income.

Peru is one of the most popular tourist destinations in South America, with travelers from all over the world drawn to the country’s natural beauty and archaeological legacy. According to OECD iLibrary, it provided about 4 percent of Peru’s total GDP and employed nearly 8 percent of the country’s population in 2020. As potential visitors fear for their safety, protests have left many tourists delayed and nearly halted the tourism business.

The current protests in Peru must be viewed in the perspective of the country’s socio economic difficulties during the previous few years. While the country rages for a political revolution, the source of the populace’s hunger is unimaginable poverty.

UPMC will boost the minimum starting salary for employees to $18