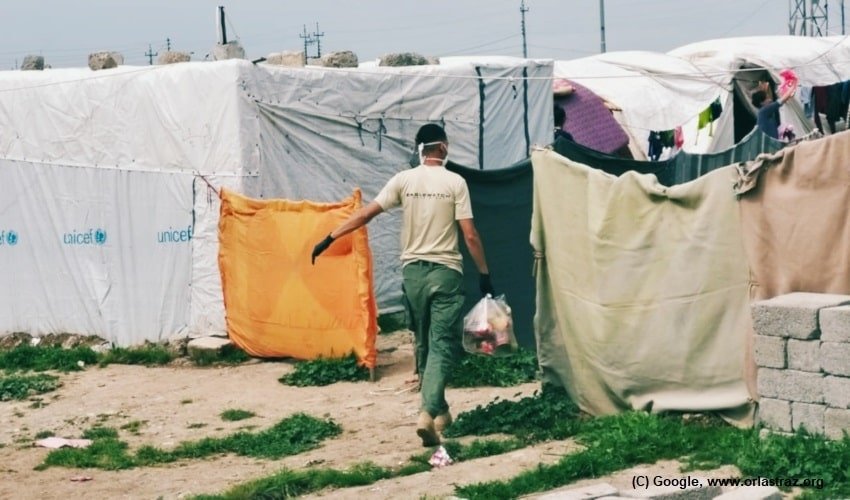 Iraqi government is continuing its operation of shutting down the displacement camps across the country, rendering over 100,000 people homeless.

Iraqi government is continuing its operation of shutting down the displacement camps across the country, rendering over 100,000 people homeless. Citing the ongoing Coronavirus pandemic and approaching winter, the Norwegian Refugee Council (NRC) has expressed its concern over the people’s fate.

The government is forcing down the closure of displacement camps in at least seven provinces in Iraq, including NRC managed Hammam al-Alil camp, one of the largest that is due to shut down next week.

Camps in Baghdad, Divala, Suleimaniya, Anbar, Kerbala, Kirkuk and Ninewa are being closed by government without any prior notice to the people, who are expected to return to their place of origin. Many people who are living in these camps come from neighbourhoods that now have been totally destroyed. Furthermore, these people are also at risk of arrests at checkpoints due to lacks of security clearance and perception of having links with the Islamic State (IS) militant group.

Closing camps before residents are willing or able to return to their homes does little to end the displacement crisis. On the contrary, it keeps scores of displaced Iraqis trapped in this vicious cycle of displacement, leaving them more vulnerable than ever, especially in the middle of a raging pandemic.

During the conflict with IS, over six million Iraqi people had fled their homes, out of which 1.3 million still remain displaced. International Organization for Migration (IOM) reports that majority of the 4.7 million Iraqis who did return to their places of origin, are living in extreme living conditions. Beginning August 2019, the government of Iraq began its operation of shutting down the camps across the country. Though the process slowed down this year due to coronavirus pandemic, it still continues.

.@NRC_Norway rings alarms about Iraqi authorities' new closures of displacement camps nationwide, abruptly turning out families with scant ability to support themselves, some unable to return safely to their home areas: https://t.co/0spcZCdH6O

Till now over 600 families have left the Hammam al-Alil camp which is closing next week.

NRC has called out to the government to give prior notice to the people living in these caps before shutting them down so that they can arrange for alternate arrangements.

Egeland has warned, “Anything short of such measures will expose tens of thousands of displaced Iraqis to continued deprivation, rejection and violence. We urge the international community to keep supporting the Iraqis forced out of camps, many of whom have no chance of returning home. With the pandemic and onset of winter, it is urgent to scale up emergency support.”

Hello to every body, it’s my first visit of this web site; this webpage carries remarkable and really fine material for
readers. https://anunturi-parbrize.ro/parbriz-isuzu-30.html

First off I would like to say wonderful blog!
I had a quick question which I’d like to ask if
you don’t mind. I was curious to know how you center yourself and clear your head before writing.
I’ve had a difficult time clearing my mind in getting my ideas out.

I truly do take pleasure in writing however it just seems like the first 10 to 15 minutes tend to be lost just
trying to figure out how to begin. Any ideas or hints? Thank you!

Hey! I know this is kind of off topic but I was wondering if you knew where I could
get a captcha plugin for my comment form? I’m using the same blog platform as yours and I’m having problems finding one?
Thanks a lot!