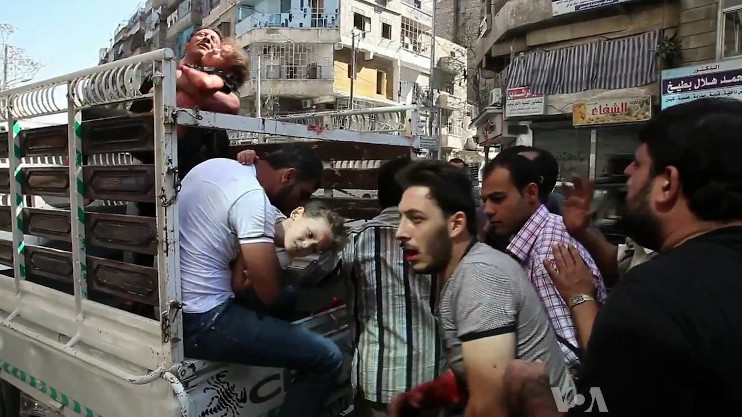 The Syrian Network for Human Rights issued its special monthly report that monitors the situation of human rights in Syria, in which it reviewed the outcome of the most prominent human rights violations by the actors of the conflict in Syria in January 2020, indicating the continuation of displacement movements in northwestern Syria under humanitarian conditions. The worst since the beginning of the popular uprising.

The 27-page report reviewed the outcome of the most prominent violations documented in January from the number of civilian victims killed by parties to the conflict, as well as the number of arrests and enforced disappearances, and the report highlights indiscriminate attacks and the use of illegal weapons (ammunition) Cluster, chemical weapons, barrel bombs, incendiary weapons) and civilian assaults.

The report included a distribution of the outcome of these violations according to the actors, indicating that in the event of joint attacks, and when the task force was unable to assign responsibility for specific attacks to a specific destination, as happened in air strikes carried out by Syrian or Russian warplanes, or Syrian-Iranian attacks or forces Democratic Syria and the forces of the international coalition, it is indicated in this case that this attack is a joint responsibility of a coalition until one of the two parties is responsible for the attack,Or, it is proven that the attack was actually a joint one by coordinating the two sides together. In the event that it is not possible to assign the violation to one of the two conflicting parties due to the proximity of the area to the clashes or the use of similar weapons or other reasons, the incident will be classified among other parties, until sufficient evidence has been reached to attribute the violation to one of the two parties.

The report relied on continuous monitoring of incidents and news and on a wide network of relationships with dozens of diverse sources, in addition to analyzing a large number of pictures and video clips.

In January, the report recorded the killing of 286 civilians, including 73 children and 30 women, the largest proportion of whom were at the hands of the Syrian-Russian alliance forces, among the victims were 1 medical personnel and 3 women. Civil defense cadres. The report also documents the killing of 7 people who died as a result of torture. And at least 11 massacres.

The report documented in Kano II at least 161 cases of arbitrary detention, including 2 children and 1 woman at the hands of the main actors in the conflict in Syria, the largest percentage of which was at the hands of the Syrian regime forces in the governorates of Damascus countryside and then Deir al-Zour.

According to the report, last month, there were at least 111 incidents of attacks against vital civilian centers, 105 of which were at the hands of the Syrian-Russian alliance forces, most of them in Idlib Governorate. Among these attacks were 14 accidents on schools, 3 on medical facilities, and 33 on places of worship.

According to the report, in January the Syrian regime forces carried out at least 3 attacks in which cluster munitions were used, all in Idlib governorate. These attacks killed 9 civilians, including 6 children and 2 women, and wounded 22 people.

The report added that the Syrian regime’s helicopter and fixed-wing aircraft threw at least 353 barrel bombs, targeting the governorates of Idlib, Aleppo, and Hama, and killed 5 civilians, including 1 child, 2 women, and 1 civil defense cadre, and at least 21 assault incidents On vital civilian centers. Pointing to the Syrian regime using explosive barrels in Aleppo Governorate this month for the first time since February 2018.

The report stated that the evidence it collected indicates that the attacks were directed against civilians and civilian objects, and the Syrian-Russian alliance forces committed various crimes from extrajudicial killings to detention, torture and enforced disappearance, and their attacks and indiscriminate shelling destroyed the installations and buildings, and there are reasonable reasons It led to the belief that the war crime of attacking civilians was committed in many cases.

The report confirmed that the Syrian government violated international humanitarian law and customary law, and the decisions of the UN Security Council, in particular Resolution No. 2139, Resolution No. 2042 regarding the release of detainees, and Resolution No. 2254, all of this without any accountability.

The report did not record the warning of the Syrian or Russian regime forces before any of the attacks, according to the requirements of international humanitarian law, and this has never happened since the beginning of the popular movement, and clearly demonstrates a total disregard for the lives of civilians in Syria.

According to the report, extremist Islamic organizations have committed extrajudicial killings, arbitrary arrests and torture. The report added that the indiscriminate and indiscriminate shelling carried out by NATO forces, “the international coalition forces, and the Syrian Democratic Forces with Kurdish leadership,” is a clear violation of international humanitarian law, and that indiscriminate killings amount to war crimes.

The report called on the Security Council to take additional measures after the issuance of Resolution No. 2254, and stressed the need to refer the Syrian file to the International Criminal Court and hold all those involved, including the Russian regime, to account after it was proven involved in committing war crimes.

The report recommended that the Security Council pass a resolution to ban the use of cluster munitions in Syria along the lines of the ban on the use of chemical weapons and include points on how to remove the remnants of these dangerous weapons.

It also called on all specialized United Nations agencies to make more efforts in terms of humanitarian food and medical assistance in areas where the fighting stopped, and in camps for internally displaced persons and the follow-up of countries, which pledged the necessary contributions.

The report called for the application of the principle of the responsibility to protect (R2P), especially after political steps have been exhausted across all agreements and statements of cessation of hostilities and Astana agreements, stressing the need to resort to Chapter VII and the application of the principle of responsibility to protect, which was endorsed by the United Nations General Assembly.

The report recommended both the Independent International Investigation Commission (COI) and the Independent International Impartial Mechanism (IIIM) to open investigations into the incidents contained therein and previous reports, and affirmed the willingness of the Syrian Network for Human Rights to cooperate and provide more evidence and details.

The report called on the UN envoy to Syria to condemn the perpetrators of crimes, massacres and the main culprits in destroying the de-escalation agreements and to restore the peace process in its normal form after Russia’s attempts to distort it and present the constitutional committee in the transitional ruling body.

The report stressed the necessity of the Russian regime to open investigations into the incidents mentioned therein, inform the Syrian society of its results, and hold those involved accountable, and demanded that the Russian regime, as a guarantor party in the Astana talks, stop stopping the failure of escalation agreements, achieve a breakthrough in the issue of detainees, and reveal the fate of the enforced disappearance in the system Syrian and stop using cluster munitions and incendiary weapons.

The report also stressed the need for the Syrian regime to stop indiscriminate shelling, target residential areas, hospitals, schools, markets, the use of forbidden ammunition, and barrel bombs, stop the torture operations that caused the death of thousands of Syrian citizens in detention centers, and reveal the fate of nearly 83,000 Syrian citizens arrested by the security services and hidden their fate To date and comply with Security Council resolutions and customary humanitarian law.

The report recommended that the international coalition forces explicitly recognize that some of the bombing operations left innocent civilians dead and demanded that they open serious investigations, compensate the victims and those affected, and apologize to them. It also stressed that the countries that support the SDF should put pressure on them to stop their excesses in all the areas and towns they control, And stopping all forms of support with weapons and others, unless the Syrian Democratic Forces stop all their violations of international human rights and humanitarian law.

It recommended armed opposition factions to ensure the protection of civilians in all areas and to open investigations into attacks that caused civilian casualties, the need to distinguish between military targets and civilian objects and to refrain from any indiscriminate attacks.

Finally, the report stressed the need for humanitarian organizations to put in place urgent implementation plans with the aim of securing decent shelters for internally displaced persons.