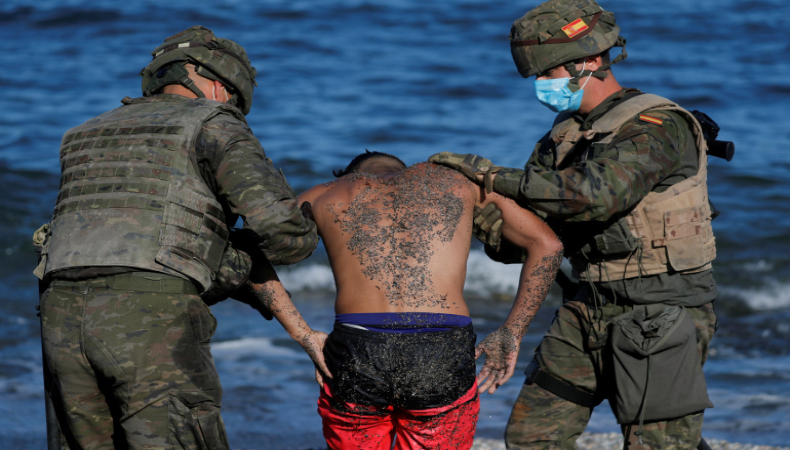 The Spanish government has asked mainland regions to relieve saturated reception centres for minors in Cueta’s North African enclave where about 1,500 of them crossed this week from Morocco.

Spain has pepped up its military deployment to the Moroccan border to help it deal with about 8,000 migrants who have jumped fences over the past two days.

As per media reports, the Social Rights Ministry held an emergency meeting on the issue where the regional authorities were asked to accept hundreds of unaccompanied minors who arrived before the latest surge.

The sudden influx has created a humanitarian crisis for Ceuta. It is the Spanish city of 85,000 in North Africa along the Mediterranean Sea, separated from Morocco due to a double-wide, 10-metre fence.

Ceuta is under Spanish rule since the 17th century, along with the country’s other North African enclave, Melilla.

Red Cross workers helped an endless queue of migrants who were emerging from the water, exhausted and shivering. Overwhelmed soldiers got to duty to separate the adults from the young while carrying children in their arms.

Morocco has also responded by saying that it is viewing the Spanish deployment of troops to patrol the border with Morocco with caution.

Many from the Sub-Saharan Africa and including 1,500 minors, entered the premises on Monday and Tuesday by swimming through and climbing over the fence.

Armored vehicles were seen guarding Ceuta’s beach on Tuesday, and police used batons to move migrants away from the beach and threw bombs of smoke to discourage others from crossing.

A Reuters reporter, covering the scenario on ground, said that the number of arrivals by sea slowed down later and some migrants started their voluntary return to Morocco. Around 8 p.m. local time nearly all migrants had been cleared.