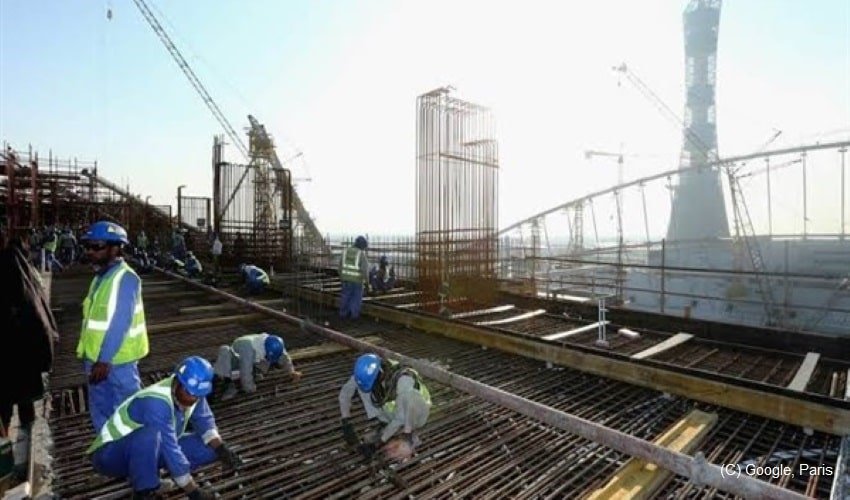 In a shocking revelation, Qatar has been found to be paying the builders and workers responsible for making Qatar desirable ahead of FIFA 2022 just 82p for the rigorous work that the authorities make them do.

In a shocking revelation, Qatar has been found to be paying the builders and workers responsible for making Qatar desirable ahead of FIFA 2022 just 82p for the rigorous work that the authorities make them do.

As per a report in the forign media, Doha is using an army of migrant workers to build stadiums in the country and paying them way less than the amount of work they have been asked to do. A payment of just 82p essentially means that as many as 28,000 people who are engaged in building new infrastructure day and night get only £158 each month for working 40-hour a week.

One of the newspapers, the Mirror revealed that one of the richest countries in the world is exploiting workers from Bangladesh, Sri lanka and the Philippines as they were the ones who were mostly targeted. One of the workers working for the country told the newspaper on the promise of anonymity that he is being paid 900 Riyal per month.

While another worker said that they sometimes do not even get paid on time. He further complained that they are given excuses that money is not there as he said.

You have to wait a long time for the bus at the end of your shift. It makes your working day even longer.

Qatar is making desperate efforts to change the outlook of people and also change the international perception of it demeaning the rights of the migrant workers but is being miserably failed. Just a few weeks ago, Amnesty published a series of articles condemning the behaviour that Qatar shows towards the migrants.

One of the officials working with the Amnesty in the Gulf area said that for the gulf country, things are not changing as quickly as it imagines them to be. Just three years ago, Qatar had made uge promises of paying a salary of QR750 and to take care of workers’ exploitation, which now seems to be failing.

Just a year after Qatar made such a big promise to the international community, the Middle Eastern nation did not ensure the payment of many of its employees who reportedly owned £4,000.

After Amnesty published reports against Qatar, the country released a statement saying that it is a ‘misleading’ report and the government does not tolerate such concerns. Since the time the historic football tournament was awarded to Qatar in 2010, a series of controversies have been surrounding the country especially those concerning the protection of the migrant rights. Some of the reports have also claimed that during this time of Qatar starting the work of the stadiums, nearly 1,200 workers died which was blatantly denied by the organisers who said the number is far less. Another report suggests that even during the coronavirus pandemic these workers were asked to work without protective gears, leading to a lot of them contracting the virus