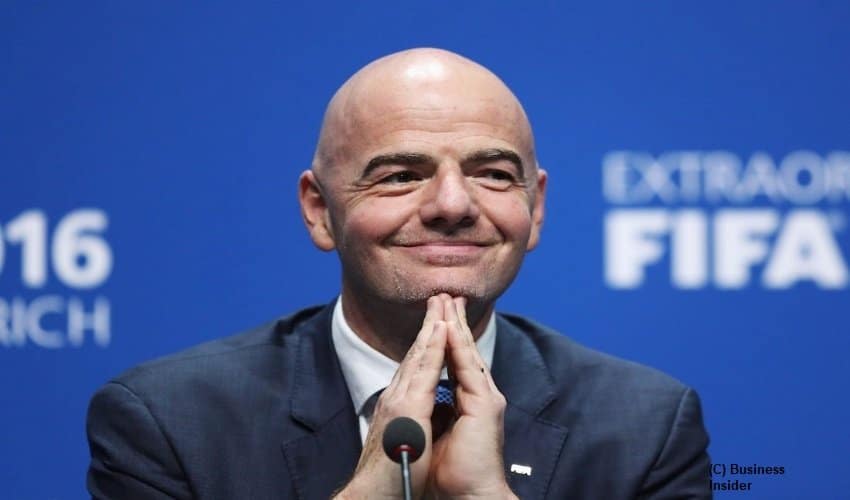 FIFA President Gianni Infantino, during his recent visit to Qatar, lauded the Gulf nation’s “incredible” Al Bayt Stadium, the venue for the Opening Match of the 2022 World Cup

FIFA President Gianni Infantino, during his recent visit to Qatar, lauded the Gulf nation’s “incredible” Al Bayt Stadium, the venue for the Opening Match of the 2022 World Cup. The stadium, built on the outskirts of the Al-Khor city, holds the capacity for about 60,000 spectators. The stadium is known for its design, inspired by the traditional marquee-tent that reflects the Qatari culture. It would be officially inaugurated within the next few months. Out of eight announced World Cup stadiums, the country has already inaugurated three are: Al-Janoub, Al-Khalifa International, Education City and other three, which are in the final phase of completion are: Al-Bayt, Al-Rayyan, and Al-Thumama.

Infantino, who seemed in awe of the new stadium and progress of others, issued a statement saying, “Al Bayt Stadium is incredible: a true football stadium. It has a real football feel and a local touch. The tented shape makes it truly unique, and the Arabic patterns in the roof are just beautiful. I am speechless.”

He could hardly contain his excitement about the fact that that ‘all eight venues will be completed “well in advance” of the event’. He said, “We have seen the plans, but when you see the reality, it is even more impressive.”

The FIFA chief said, “Qatar has been able to continue to advance during the last six months while the world stood still – from infrastructure preparations to important developments such as the recent labour reforms announced by the government. I am very pleased with Qatar’s progress ahead of the tournament.”

Already in 2020 one can see that everything will be close at hand where fans of all nationalities will have the opportunity to use a great public transport service, as well as enjoy the moderate temperature of Qatar at that time of year, it will be a momentous event.

Shockingly, the laudatory FIFA president made no mention of the country’s current Covid situation and its mishandling of the pandemic outbreak. Few months ago, Doha reported the highest per capita coronavirus infection rates in the world and now its official infection rates seem to have dropped sharply. Fox News report contradicted the country’s Covid control claims and said that the country is under-reporting Covid-19 deaths for the fear of risking delay or cancellation of FIFA World Cup, which is due to be held in November and December of 2022. Cornerstone Global Associates, the London-based consultancy raised the demand for change in venue for the tournament on the basis of its report which read, “An internal memo… conducted by a leading construction company in Qatar working on FIFA World Cup projects raised concerns that many of its labourers who were infected, died, but were not reported as COVID deaths.”

The company’s 10-page document, titled “COVID-19: Will FIFA World Cup 2022 go ahead in Qatar?”, added, “The concerns raised are in line with concerns about the clear discrepancy between the number of infections and the mortality rate. The internal memo referred to the repatriation of the bodies of the deceased to their native Nepal and India. This practice goes against the recommendation by various health authorities around the world. This also suggests that the Qatari authorities have been misreporting COVID-19 deaths, thereby misleading the global healthcare community”

The super impressed Infantino didn’t seem to bother about any of the details given out in the report or mentioned any delay, postponement or change in venue plan amid the ongoing virus outbreak, which otherwise pushed the dates of the European football championships and the Tokyo Olympics.

Could Qatar’s bringing FIFA officials be the reason behind Infantino’s silence and smiles? In April 2020, the US Department of Justice issued an indictment, accusing three members of FIFA’s 2010 executive committee: Nicolas Leoz, then president of South American soccer’s governing body CONMEBOL, Ricardo Teixeira, then-Brazil Football Federation president, and an unnamed co-conspirator, of taking bribes to name Qatar of the 2020 event.

Besides, the FIFA chief also couldn’t care less about pilling rights abuse reports carried out by many rights group over the past years, as he was quick to commend the country’s announcement for labour reforms but preferred stayed tight lipped about country’s rising unbiased approach and mistreatment towards its domestic workers, migrant workers, and labourers, many of whom even lost their lives in the course of construction of the glorious stadiums.

Qatar has been dependent on foreign workers for its vast array of construction projects to prepare the country for the World Cup. The country, carrying out these construction projects rampantly for the past four to six years, cared least about the safety of thousands of migrant labor, who gave their sweat, blood and even lives to these sites. Last year, Nepal’s Labour Ministry confirmed death of over 1400 Nepalese workers trapped in Qatar. In a shocking investigative report, carried out by the Guardian months later, it was revealed that ‘hundreds of migrant labourers in the World Cup host nation die each year, with the majority of the fatalities attributed to heart attacks or “natural causes” by the Qatari authorities’. Many died due to what is called “sudden death syndrome” as they work under fatal levels of heat stress, toiling in temperatures of up to 45C for up to 10 hours a day. The report added that to hide the deed, Qatar authorities did not perform postmortems, despite recommendations from regime’s lawyers.

In an Amnesty report, published in April 2020, the rights organisation reported that Qatar used pandemic as an excuse to round up several migrant workers. The organisation which interviewed about 20 men from Nepal who were apprehended by Qatari police, disclosed that told most of the men, mostly migrant workers, were taken on the pretext that they would be tested for COVID-19 and would be returned to their accommodation. But instead were thrown in detention centres and held in appalling conditions for several days, before being repatriated to Nepal.

Besides, Steve Cockburn, Head of Economic and Social Justice at Amnesty International emphasised that Doha doesn’t care much about its migrants, dead or alive and many of its companies compelled the workers to work without pay for months at stretch and without practices any protection measure against the Covid-19.

Migrant workers told us about the hardship they endured having worked without pay on Al Bayt Stadium for months on end. They are worried about their families, who rely on the money they send home from Qatar to pay school fees and medical bills.

Can I just say what a comfort to discover somebody that truly knows what they are discussing on the internet.
You definitely realize how to bring a problem to light and make it important.
A lot more people need to look at this and understand this side of the story.
I was surprised that you are not more popular given that you most certainly
possess the gift.

joe biden we just did

Hello, i believe that i saw you visited my website thus i
came to go back the choose?.I’m trying to in finding things to enhance my
site!I suppose its ok to use a few of your concepts!!