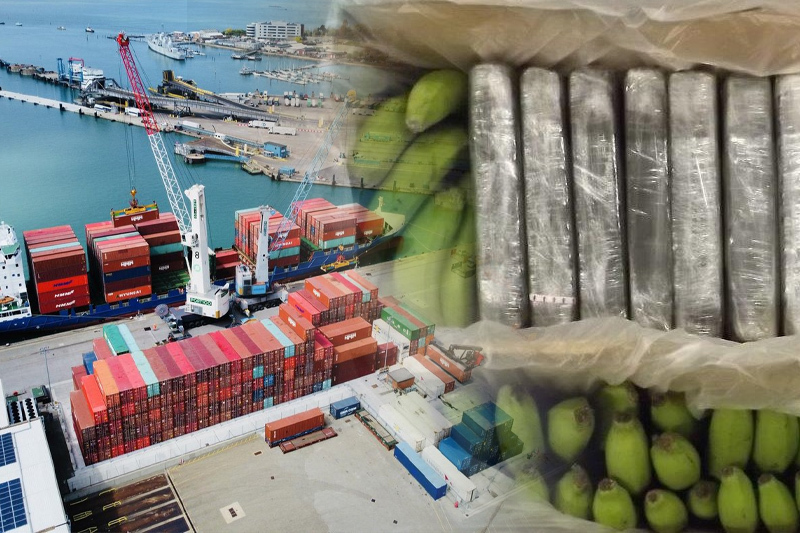 UK – A group of men tried to smuggle into the UK a “colossal” amount of cocaine hidden in bananas. Three Portsmouth dock workers and a truck driver are charged with conspiracy to import Class A drugs.

Prosecutor Robin Leach said the men were trying to smuggle £118 million worth of cocaine through the port into the UK.

They did not know that the drugs had been found and smuggled out in the Netherlands on their way to the UK, as the Portsmouth Crown Court heard.

Michael Jordan, 44, and Clayton Harwood, 55, both from Portsmouth, Michael Butcher, 66, from Waterlooville, all deny one charge of conspiracy to import Class A drugs, and Ahmet Aydin, 48, who has no permanent address also pleaded not guilty.

The drug was initially hidden inside a freighter that left Turbo in Colombia on April 7 with 372 pallets of bananas destined for UK supermarkets.

In total, 1.5 tons of cocaine were hidden on two pallets, which Leach called in court “a colossal amount.” When the ship docked at Vlissingen in the Netherlands on April 21, the court said that sniffer dogs found the drugs and police removed them.

UK Border Patrol officers were alerted, but two pallets remained on the ship as it sailed two days later for its final destination at Portico Terminal in Portsmouth, Hampshire. As the jury was told, after the boat docked, the border guards replaced the cocaine with dummy blocks and audio equipment.

The court learned that on April 24, Mr. Butcher, Mr. Jordan and Mr. Harwood arrived at work as usual. Mr Leach told the court that the three Portico employees had “quite a few conversations or meetings between them during that day.”

The court heard that Mr. Aydin then arrived in a “big truck” at the Portico gatehouse at 2:07 pm Moscow time, but the officer told him that he “had no legal documents.” Mr. Leach told jurors that Mr. Aydin received the wrong pass while messaging with a contact in Portsmouth named “Carlos” who was “actually following” him.

Why women have to sprint into leadership positions