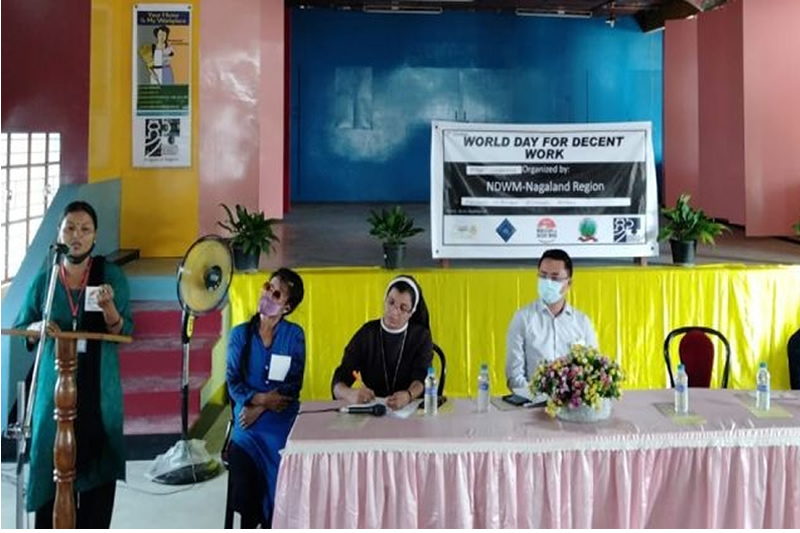 Nagaland, India – Covid-19 pandemic has whipped nations’ economy and struck a havoc on livelihoods. Some professions are at the worst receiving end than others. Domestic workers have always been the silent bearers of discrimination and abuse, and pandemic has just severed any remaining gap. Dimapur, a city in Nagaland of India, has domestic workers who have been suffering in silence during pandemic and even before that, mostly women. The misery of these workers was reiterated by programme observing “World Day for Decent Work” which was organized by National Domestic Workers Movement (NDWM) of region of Nagaland.

Domestic workers from Dimapur said, “We work like we are being given punishment but are not paid honestly according to our work or sometimes not even paid at all.” Low wages and sometimes withholding the wages are the most common forms of abuse the domestic workers of Dimapur have to endure. Pandemic has also led to termination of their employment. A domestic worker in Dimapur shares her agony – before pandemic she worked at three houses but post pandemic two employers terminated her work while the third asked her to do outside work like cleaning the garden. After a month she was asked to stop and paid Rs 1000.

Workers are seeking other opportunities now. A worker asked if any programme offers domestic workers with health insurance among other benefits. These workers are anguished that their plight is being unheard by the government. A woman said that it is time their work should be stopped seen as small. She said, “We do all kinds of work but we are paid only around INR1500-2000 or INR 3000 at the most.” There are about 2050 registered domestic workers in Dimapur area alone, including migrants and local workers, said Sr. Pramila Lobo UFS, Coordinator of NDWM. She said it has been 10 years to adoption of domestic workers convention, but still “there is a lot more to do and the central, state, local government, employers, and the general public need a serious reality check for the welfare of the domestic workers.” She stressed further on the demands of these workers – minimum wages, protection against all types of harassment, social security and access to other benefits, and contracts being provided to them by the employers.