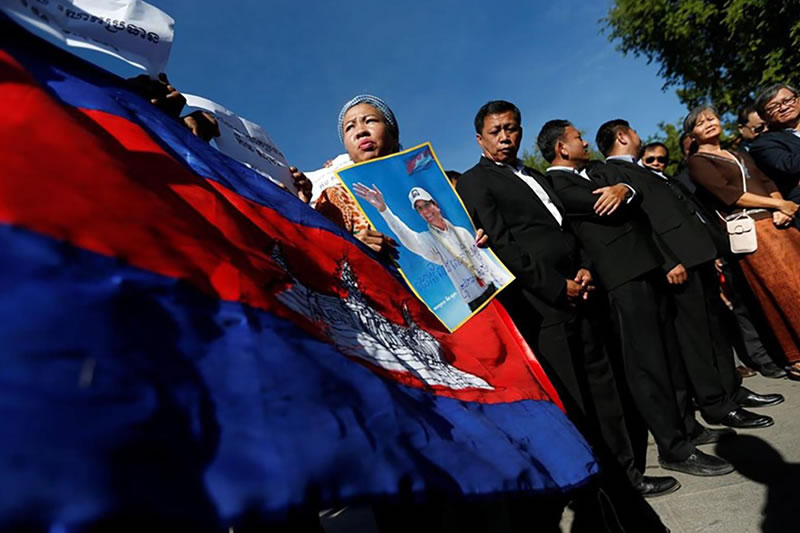 Cambodia Govt is a threat to fundamental human rights:UNHRr

The UN rights chief Michelle Bachelet lauded in the report economic recovery policies laid down by the Cambodian government along with social protection plans to support vulnerable people during the Covid-19 pandemic. But she also condemned the rampant crackdown by Prime Minister Hun Sen’s government. She elaborated that government has provided law enforcement bodies with sweeping powers to handle pandemic. But this is steering towards misuse of power that is curtailing people of the fundamental rights. “By the time this report was prepared, my office had received credible reports that at least 110 individuals were held in pre-trial detention and 16 received prison sentences through summary trials for violating COVID-19 restrictions,” she said. “Since June, we have been informed of several hundred more reported arrests, exacerbating Cambodia’s already serious prison overcrowding.”

Human rights situation in Cambodia has worsened exponentially since last UNHRC’s resolution on Cambodia took place in 2019. Global watchdog Human Rights Watch slammed the crisis in Cambodia adding that it seems unlikely to carry out upcoming 2022 and 2023 elections in a free and fair manner. Main political opposition party in Cambodia has been dissolved and its leaders are in prison, facing trials or have fled into exile to escape arrest.

Past two years have seen use of uncalled violence to break peaceful protests; trials on political opponents, activists and youth; crackdown on media outlets, journalists and social media critics. Increased online surveillance and tightened internet control too is part of continuing repression by the government. Additionally, government is establishing a National Internet Gateway that will allow it to monitor all internet activity and block internet connections of users based on undefined grounds.

“We remain extremely concerned with the impunity for attacks against political activists and human rights defenders,” Bachelet said. “Of particular concern are continuing threats of arrest and violence by senior officials against opposition activists hiding in Thailand. These must cease.”