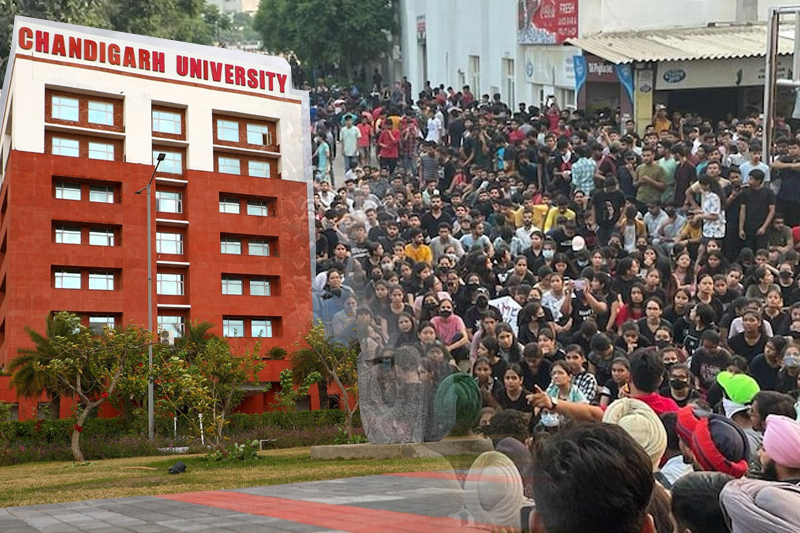 India – A massive protest broke out at the Chandigarh University campus in India after students claimed that the videos of around 60 girls taking baths in the hostel were leaked.

Police reportedly reached the campus and arrested a girl student who allegedly made videos of girls and sent them to a boy in Shimla, who shared those on social media. However, after investigations, the police said that the woman, who has been arrested, had sent her own video to her boyfriend. The woman’s boyfriend, Sunny Mehta, has also been arrested from Shimla by the Punjab police.

The students at the campus were reportedly not satisfied and protests continued at the university despite assurances of a further probe by a Special Investigation Team (SIT).

Hundreds of students came out on the campus on Saturday night. Several social media posts were doing the rounds claiming that the university authorities were trying to cover up the whole incident. They alleged that the videos of around 60 girls taking baths in the hostel were leaked. Some students from the university claimed that the accused was demanding money from the girls. Three female students claimed that they spotted the accused woman taking photos in the common washroom from underneath the door.

Several videos on the internet said that many girls tried to commit suicide because of the whole matter. However, Punjab police denied any incident of death, injury or attempt to suicide.

Mohali police chief Vivek Soni said, “We have found out that there is only one video of the accused herself. She has not recorded any videos of other girls.”

As per media reports and various sources, Punjab police are still investigating the whole matter and the accused woman’s phone has been sent for forensic tests. The area around the bathroom on the campus is also being investigated.