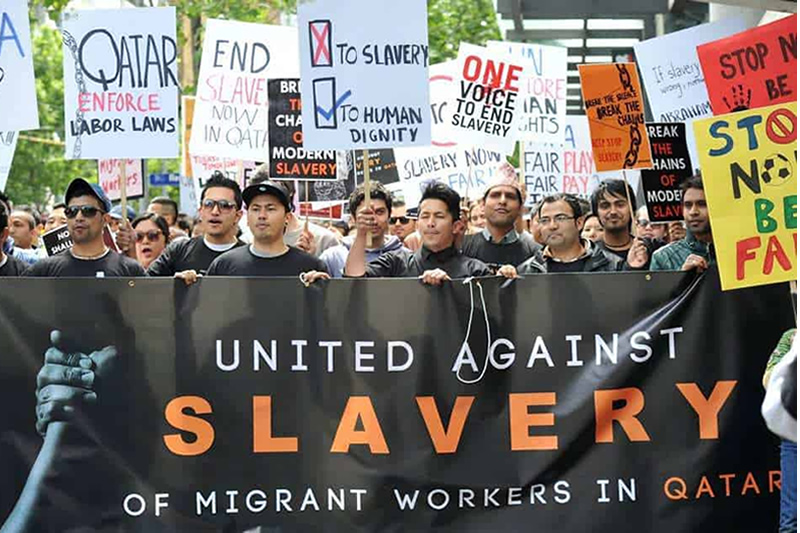 FIFA 2022: European football team unite to stand against exploitation of workers in Qatar

Qatar – In a major let down for Qatar to change its image globally with the upcoming FIFA World Cup 2022, football teams are taking stand against the incidence of abuse domestic workers, industry workers and labourers face in the country.

After Germany, Netherlands has also joined to express its disappointment in the reported cases of migrant workers in the Arab country. It is no more hidden that there are a considerably large number of cases that prove that Qatar has been exploiting domestic workers, labourers, migrant workers.

The migrant workers who were responsible to get the stadium ready for the upcoming FIFA World Cup 2022 in Qatar(Doha) are no exception to these atrocities. These workers have been putting their lives at risk by working 24/7 even during the coronavirus pandemic and yet they are not paid minimum wages for the work they do.

Many of them didn’t even have a proper contract and those who have, are challenged by the authorities to not report the crimes. They are either dealt with force or are being threatened to not even being given the payment they are getting now. This has left them isolated in a foreign country begging for help.

Noting all these cases, the Netherlands football team has shown its stand against the exploitation of workers rights in the country and this opposition has been going on since 2010. For over 10 years, the Netherlands has opposed the idea of conducting the biggest football event in Qatar citing violations of human rights despite warnings.

However, it was concluded the boycotting event is not the best answer to these issues as it would mean that the migrant workers will further suffer loss of their wages and the recent steps the country has been taking, to ensure human rights, to maintain its image, will come to a halt.

The better solution however is to go ahead with the world cup and demonstrate against the exploitations in the country. The major event can be a huge platform to show what is happening in the country and how Qatar is trying to cover up the situation by taking advantage of the mega event.

Even in Germany, there were mass scale protests where people were demanding a boycott of the world cup as the Germany football team was starting its session. People from the football circle were also very critical of the activities in the country and hence demanded for a complete boycott.

The Royal Netherlands Football Association (KNVB) has continued to bring out the problems since a long time and is working together with Qatar and FIFA to identify and emphasise on the problems.

In Germany, calls to boycott the 2022 World Cup in Qatar have received support from within football and society. Above all, FIFA itself admitted to the crimes that were taking place under the umbrella of the world cup. “We are aware of reports that the company TAWASOL – a sub-contractor in the construction of the Al Bayt Stadium – has violated the standards for workers,” said the football organization.

This was after a news article included a video where a sting operation revealed horrific incidents from the stadium sites of the world cup. Nepali workers were the most affected of the migrant community as they saw over hundred deaths of Nepali workers in this year alone.

The teams are continuing to move forwards and play for the FIFA world cup to ensure that they get a platform to bring out the challenges of these workers to the masses, experts stress. Majority of them are European countries who themselves have faced the aggressive approach of Qatar in their countries and hence, they are taking every opportunity to counter the exploitation of human rights.