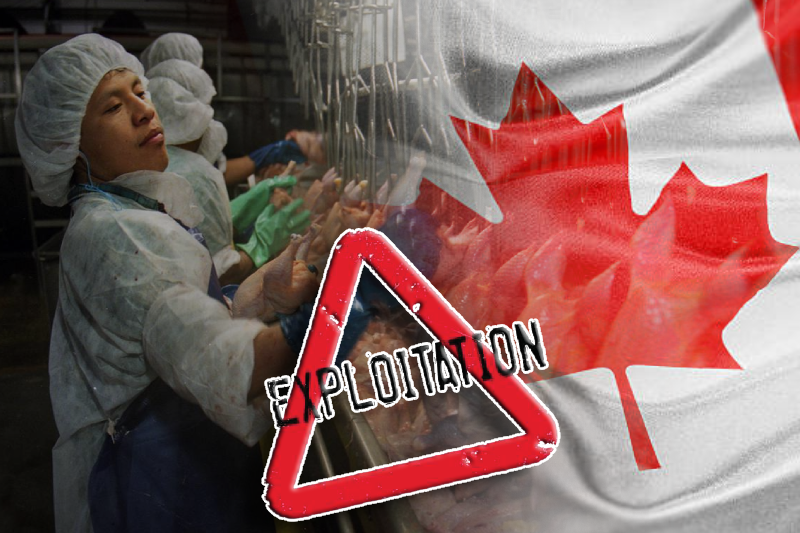 Canada – Canada’s meatpacking workers are facing dangerous working conditions. There have been repeated strikes in recent months at Olymel and Exceldor slaughterhouses in Quebec. These strikes have shown the dissatisfaction amongst workers.

There have been increasing production pressures and less production capacity. Wages have been on a freeze and have not been increased according to increase in manual labour. Working conditions are pathetic, as workers are exposed to long hours of smell of blood and animal waste.

Temperatures continue to wary thought most are subjected to cold storage like environmental conditions for prolonged hours. While this is in the nature of the trade, excessive production pressure has prolonged exposure to such things amongst the workers.

Such arduous conditions prevailing now reduced number of slaughterhouses might have led to a high turnover but has also meant understaffing, resulting in overwork for those employed in the industry. Even before the pandemic, there were 28,000 vacancies nationwide. To fill this labor shortage, companies in Canada are turning to temporary foreign workers, one of the most exploited sections of the working class.

Foreign workers don’t get equal pay in comparison to their counterparts. They are also tied down to the employer they are working with, under their work permit categories, making it hard for them to contest their exploitation. Within the pandemic times, foreign workers were the first to lose their jobs. Employers would ask them to go and fetch food from food banks and not offer help. In all, meat industry workers have been seen to be victims of such callous disregard throughout the pandemic.

Following the May 2020 award of $77 million in federal grants to “help protect” workers, the meat industry—which never shut down its plants—used the government’s back-to-work policies to bring production back to pre-pandemic levels. Workers meanwhile did not get the luxury to work with social distance and the environment remained perfect for the virus to thrive as well.

Unfortunately, there are pro-capitalist unions at work that have not spoken up for the rights of the workers but teamed up with the company owners itself. Now, mass protests include workers seeking proper protective gear, fair wages, better working environment and fair hours of work. Since the year 2000, the major meat companies in Canada have gone ahead and consolidated their production units. These include Cargill, Olymel and Maple Leaf. This was done to increase production and reduce production costs. But the repercussions have had to be bourn by working labor only.