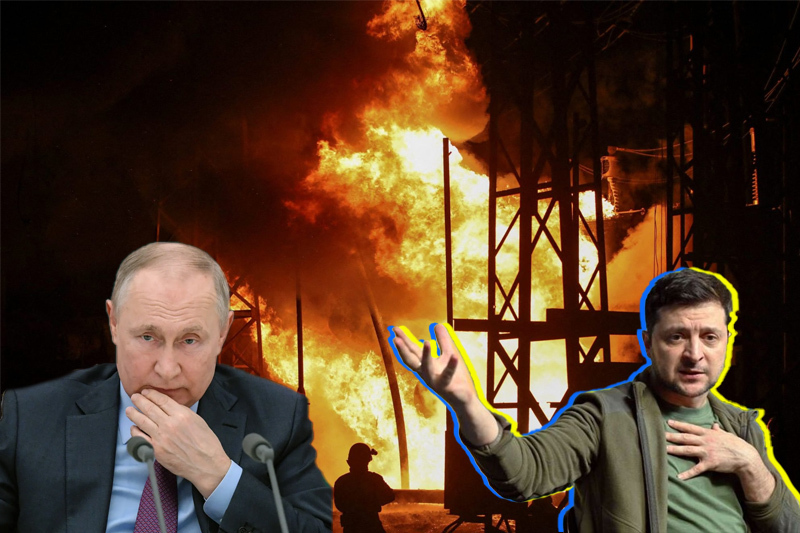 Ukraine – Thirty percent of Ukraine’s power plants have been destroyed in just over a week, causing “massive blackouts” across the country, President Volodymyr Zelensky said Tuesday as the Kremlin ramps up attacks on critical energy infrastructure.

“Another type of Russian terrorist attack: targeting energy and critical infrastructure. Since October 10, 30% of Ukrainian power plants have been destroyed, resulting in massive power outages across the country,” Zelensky wrote on Tuesday. He added that “there is no room left for negotiations with the regime of (Russian President Vladimir) Putin.”

Later, the Russian Ministry of Defense confirmed that the Russian military carried out precision strikes on “energy systems” in Ukraine. “During the day, the Armed Forces of the Russian Federation continued to strike with long-range high-precision air and sea-based weapons on the military command and energy systems of Ukraine, as well as on arsenals with ammunition and foreign-made weapons, all of the intended targets were hit,” Lieutenant Colonel Igor said on Tuesday Konashenkov.

In recent days, Moscow has struck at key Ukrainian energy facilities, leaving areas in at least three cities without electricity. A residential area of ​​the capital Kyiv is experiencing power and water outages, local energy company DTEK said on Facebook on Tuesday.

“Russian shelling damaged a critical infrastructure facility in the Desnyansky district, which led to power outages for residents of the Troyeshchina microdistrict and a water utility supplying water to the Left Bank of the capital,” the company said.

In the Dnipropetrovsk region, power outages occurred in at least three districts, including part of the city of Dnipro, and a water pumping station lost power after Russia fired two rockets at the power facility, which, according to local authorities, led to “a fire and serious damage.”

Further west, the mayor of Zhytomyr said in a statement that the city was experiencing power and water outages and hospitals running on backup power.