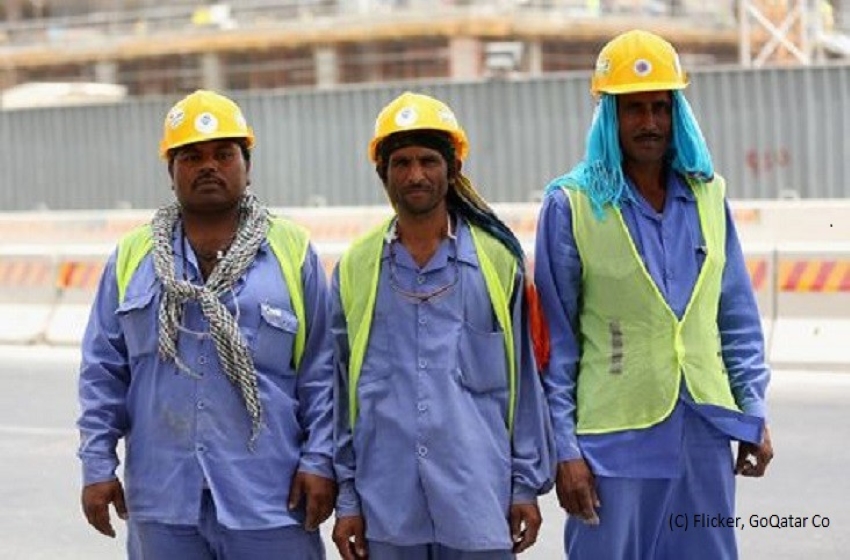 The country gearing up for 2022 FIFA World Cup tournament had been carrying out construction projects rampantly for the past four years, without ensuring much safety for thousands of migrant labor, who gave their sweat, blood and even lives to these sites.

Qatar, which has more than 2 million migrant workers, is heavily dependent on work force migrated from other nations as its overall population is just 2.6 million. Thousands of labourers especially from African and Asian nations move to the tiny rich gulf country in the hope of earning better income and attaining better standard of living than their native nation. But recent reports of human rights abuses have surfaced the horror many endure by working under abusive Qatari employers.

The country gearing up for 2022 FIFA World Cup tournament had been carrying out construction projects rampantly for the past four years, without ensuring much safety for thousands of migrant labor, who gave their sweat, blood and even lives to these sites. Last year, Nepal’s Labour Ministry confirmed death of over 1400 Nepalese workers trapped in Qatar. In a shocking investigative report, carried out by the Guardian months later, it was revealed that ‘hundreds of migrant labourers in the World Cup host nation die each year, with the majority of the fatalities attributed to heart attacks or “natural causes” by the Qatari authorities’. Many died due to what is called “sudden death syndrome” as they work under fatal levels of heat stress, toiling in temperatures of up to 45C for up to 10 hours a day. The report added that to hide the deed, Qatar authorities did not perform postmortems, despite recommendations from regime’s lawyers.

Nepal confirms ‘many deaths’ in Qatar as show says figure as high as 1,400 https://t.co/FHO2f5AVts pic.twitter.com/zihImxTHzI

In a recent human rights dialogue, conducted by the United Nations on July 1, Qatar’s Representative to the UN Office in Geneva Ali bin Khalfan Al Mansouri said that the his country would soon provide free tests and healthcare services to everyone who lived there. He added that the Qatari government was also keen to protect migrant workers especially during the Covid-19 pandemic as it pressurised employers to pay wages, and launched a service to receive labor complaints.

Al Mansouri’s speech sounded nice in theory, but in practice things were very different than they appeared to be. He might have forgot how his nation looted money from helpless and poor migrants on the pretext of job recruitment. Besides, the recent Amnesty International report unveiled the case of 100 workers, who did not receive their dues for about seven months. They worked for Qatar Meta Coats (QMC), a design and construction company, which took contract for façade work worth €770 million on Al Bayt Stadium, but were still waiting to be paid their full dues.

Migrant workers told us about the hardship they endured having worked without pay on Al Bayt Stadium for months on end. They are worried about their families, who rely on the money they send home from Qatar to pay school fees and medical bills

Despite global criticism, these reports highlight that Doha doesn’t care much about its migrants, dead or alive.

Also in an extensive investigation, carried out between March 2018 and July 2019, the Amnesty International unveiled the case of three companies –Hamad bin Khaled bin Hamad (HKH), United Cleaning and Hamton International (Hamton) – which in total employed over 2,000 workers who had not received their salaries for months and about 1,620 of those workers even submitted complaints to the new Committees asking for compensation. The rights group, which followed the cases of 33 such workers, said, “The Ministry did not provide any information regarding the number of cases heard by the Committees, the delays in processes, or the number of complaints successfully resolved, but said that they intervened to help negotiate payments for hundreds of workers, as well as work with local organizations to provide food and generators in workers’ camps.”

When team Amnesty spoke to Deepak, a migrant worker from Nepal, it found out that he was one of 680 workers from HKH who had filed complaints in March 2018 when their company ceased to operate.He said that he had worked for them for six months without pay, but eventually won the case. But unfortunately despite winning his case at the Committees he did not receive any compensation, even after a year of the decision being announcement.

Deepak, a migrant worker from Nepal

Nations should be wary of sending their citizens to Qatar and conduct an extensive check of companies which officer requirement. Besides, the world should come together seeking for ban of 2022 World Cup, which the country would host and should also urge UN and other international players to impose strict penalties on the oil-rich Gulf nation which has displayed complete lack of empathy, human rights and values. The only goal which Doha had its eyes on was completing the construction of World Cup stadiums, while showing absolute disregard for human lives which build it.

I could not resist commenting. Exceptionally well written!
This is a topic that’s close to my heart…
Cheers! Exactly where are your contact details though?
Its like you read my thoughts! You seem to understand a lot about this, like you wrote the
book in it or something. I believe that you could do with some p.c.
to drive the message house a little bit, but instead
of that, that is wonderful blog. A great read.
I will definitely be back. http://hats.com/

Here is my web blog … John

Wow, this paragraph is good, my younger sister is analyzing these
things, so I am going to convey her.

Itâ€™s hard to find knowledgeable people on this topic, but you sound like you know what youâ€™re talking about! Thanks